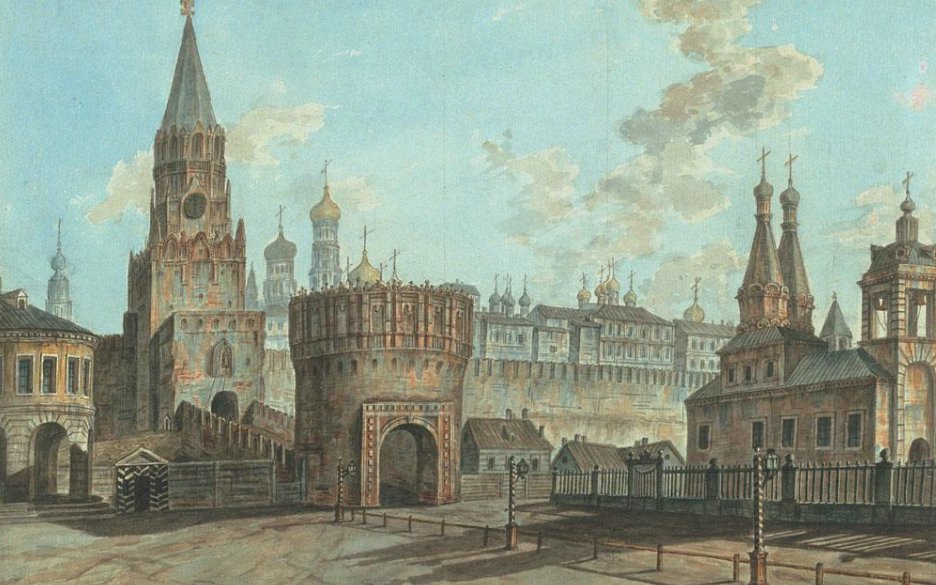 There are twenty observation posts around the old fortress: today, they are mere decorations but back in the day they protected the heart of the city. The observation towers were used by guards to watch if the enemy was approaching Moscow, to store gunpowder for guns and cannons and provide access to water. Learn about the history of the Kremlin towers.

The square Kutafya tower looks like a fairytale gingerbread house: it's got a white brick bottom with barred passages and a delicate-looking superstructure. The impression is deceptive, though. First, over centuries it has lost some of its height while the delicate superstructure was only added in the 17th century. And second, it is actually a barbican tower whose main purpose was to protect the entrance to the fortress. As for the name, it came from the shape of the tower: in the olden days the word Kutufya was used to refer to plump slow women.

Through the main entrance

The Troitskaya Tower is the central tower that traditionally patriarchs and tsars entered the Kremlin through. It's also the tallest in the Kremlin at a whole 80 meters. And it wasn't only used for defense, the basement at one point housed a prison. Special recesses called kiotas, held the icons of the holy trinity and our lady of the sign. These were removed in Soviet times with one of them being replaced with a clock. What's interesting is that the Troitskaya tower is still in use today: it houses the rehearsal rooms of the Presidential orchestra.

The Komendantskaya was originally known as the Kolymazhanya tower, located right next to it was the parking lot for the royal sleds, carriages and carts, one informal word for a horse drawn cart in Russian being "kolymaga". One feature of this tower is that it was built in such a way as to allow it to be defended independently from the rest of the fortress. For the same reason there were no passages through this tower so it was named "Deaf" since that word in Russian can also mean "dead-end".

A stone to remember

Between the Borovitskaya and Komendantskaya towers sits the square Oruzheynaya Tower. The name literally means Armory Tower on account that the Kremlin's armory chamber is located right next to it. Over the combat deck there is a tetrahedron roof structure with an observation post on top of it. It is generally believed it was built from the remains of the stone work of the old Kremlin structures: if you're lucky you may even find a nice stone in the grass at the foot of the tower.

Out of the forest

At one point the hill the Kremlin now occupies was covered in a dense forest. One Russian word for a dense forest is bor so one of the towers was nicknamed Borovitskaya. It was a utility tower, there were some basements and mead shops located next to it. It has to be said, though, that after the Kremlin was renovated in the 16th century this tower got some secret rooms: in the event of a siege these were supposed to allow the defenders to get closer to the enemy and eavesdrop on their plans.

The Taynitskaya tower used to have a special underground passage: the idea was that if things got really bad during a battle, this passage would allow the defenders to leave the Kremlin undetected and get to the bank of the Moskva river. However, in the 19th century it had a far more peaceful job: a really beautiful fountain lit up in various colors was built here for the coronation of Alexander III. Up until the communist revolution the Tainitskaya tower had a cannon that was fired every day at noon, so people knew exactly what time it was when they heard it.

This tower is a familiar sight for anyone who's ever been to Red Square: the chimes on the Spaskaya tower strike the prices time. They also play some tunes: in the late 19th century they played the march of the Preobrazhensky Regiment, after the revolution they played the International and nowadays they play the Russian anthem four times a day. Unlike the other Kremlin structure this tower features a distinctly Gothic style.

The delicate looking Nabatnaya Tower was built in 1495. The alarm bell at the top of the tower was supposed to warn people of fires. But in the 18th century the bell's tongue was removed.

The Tsarskaya Tower is really young: the 1680 meter tall structure was built in 1680. It's got a tend shaped structure at the top which makes it look like Russian terem. Russian monarchs went up there to shows themselves to the people after coronations.

The Kremlin has two no-name towers: it is known for a fact that one of them was used to stow gunpowder. One possible explanation for why they have no names is that people must have figured there would be no point to wasting good names on them if they could blow up at any moment. Now now they are known as the first and second unnamed towers.

Five towers have pentacles on top of them: Nikolskaya, Vodovzvodnaya, Borovitskaya, Spasskaya and Troitskaya.

If a foreign flag flies over the Borovitskaya tower that means the head of a foreign state has arrived in Russia on an official visit.

In the 17th century a water pump was installed in the Sviblova tower: water from the Moskva River was first pumped into a well and then into a pull, after which it was pumped down lead pipes into a reservoir from which it was distributed to the various structures inside the Kremlin.

The Petrovskaya tower got its name from the Church of Metropolitan Peter, which was housed on its second floor.

The Beklemishevskya tower is the only one that hasn't been repaired or renovated in centuries.

People say that there was an underground passage between the Konstantino-Eleninskaya tower and Saint Basil's Cathedral to move troops during a battle. Falcons have been living here since 2017: these predatory birds have lived in the territory of the Kremlin since times immemorial.

The Senatskaya tower is often features in paintings. For example, you can see it in Vasily Surikov's The Morning of the Streltsy Execution, however, the artist made some changes to it, for example, the top tent-shaped structure is rectangular in his picture. During Soviet times authorities toyed with the idea of changing it by installing a statute of Joseph Stalin on top.

The Nikolskaya tower, from which the street of the same name once began, once had an icon of Saint Nicholas of Mozhaysk on it. When Napoleon troops were pulling out of Moscow in 1812, this was one of the structures they blew up. The Moscow residents were quite surprised when they found the icon completely unscathed among the ruins of the tower.