'All in Moscow is filled with poems' 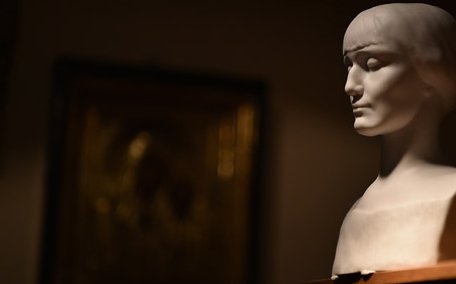 Anna Akhmatova was a frequent visitor to the capital. She visited her friends, received admirers and apprentices. She circled round the city, changing addresses and blessing even the most boring of rooms with her majestic presence. Let us take a walk around Moscow in the footsteps of Akhmatova and see how the city is reflected in her poems.

How it all started

Akhmatova once told the writer Lidia Chukovskaya that she first discovered Moscow by Volkhonka and Prechistenka. Here, on Tretiy Zachatyevsky Pereulok, she lived with her second husband – the Orientalist Vladimir Shileyko. 'To my left is a wasteland, to my right is a monastery, and opposite me is a tall maple painted red with the sunset...', this is how Akhmatova described her home. What does it look like now? It is probably house number three where the opera singer Feodor Chaliapin once lived. In 1918 the neighbourhood was an uninviting place, full of cold and hunger. Akhmatova herself confessed that if she had stayed in Moscow back then, her life would have turned out very differently.

Moscow so distant and strange

Akhmatova was evacuated to Moscow in autumn 1941. Leningrad, where her friends remained, was bombed by the Nazis. Bombs howled over Palace Embankment, roared over residential areas and streaked lines through the sky. In spring of 1942 the Tomashevskys, a family of philologists and literary scholars, were summoned to Moscow. Alexander Fadeev signed the official document. The poet, who had already been evacuated to Tashkent, wrote to her friends, 'I have thought about you so much during all these months. How I want to know everything about you. I recall the kindness shown to me by you and Boris Viktorovich with endless gratitude... Give my regards to Pasternak, the Osmerkins, and the whole of Moscow, so distant and strange.' The Tomashevskys lived in house 29 on Gogolevsky Boulevard. Akhmatova later visited them often, and the Tomashevskys supported her when she was expelled from the Union of Soviet Writers after the Second World War.

And greeted everyone majestically

Akhmatova was often seen in Pomerantsev Pereulok too. She came here, to the embrace of the Garden Ring near Prechistenka, to visit Sofia Tolstaya-Yesenina, the granddaughter of Leo Tolstoy. It was also the gathering place for literary evenings, which invariably centred around Akhmatova. Her appearances were later compared to royalty: 'Akhmatova entered Sofia Tolstaya's room majestically and greeted everyone majestically. While she did not have a kingdom, her royal status was bestowed by admirers of her and her poetry.' She also visited the famous doctor Vasily Shervinsky at number 8 Pomerantsev Pereulok. She was friends with his son Sergey, a translator and a literary scholar, and frequented his dacha near Kolomna.

Her connections to Leningrad ran deep – there she met the translator Maria Petrovykh, and they became friends for life. The poet often visited Maria in her flat on the corner of Begovaya Street and Khoroshevskoye Shosse. She regaled her friend with poems, and they created poetry anthologies together. A landmark event took place here in 1962 when Akhmatova met Alexander Solzhenitsyn. She predicted a very bright future for him. Impressed by the encounter, he spoke of her as the greatest poet of her time.

Those who find themselves walking along Myasnitskaya Street cannot help but stop by the tea and coffee shop. This courtyard was once the home of the artist Alexander Osmerkin. He painted a portrait of Akhmatova by the window of the Fountain House in Leningrad. Akhmatova loved the painting very much. Osmerkin made it in 1939, during a period when the poet was immersed in Pushkin's works and wrote very little. By that time, her son Lev Gumilyov had been in labour camps for a year. The artist depicted her in a simple white dress as she looks out into the restless white night. As the linden leaves rustle outside, Akhmatova's face is half-turned towards the old green trees.

She wrote on those strange, horrible nights,

'I have a lot of work to do today:
It’s necessary to kill the memory to the end,
The soul must be petrified,
We must learn to live again.
And not that... The hot rustle of summer,
Like a holiday outside my window.
I have long anticipated this
Bright day and an empty house.'

In 1951 she visited the house on Myasnitskaya to congratulate Alexander Osmerkin on his birthday. It was to be her last visit to the artist's house. In 1953 she saw him laid him to rest in Vagankovo Cemetery.

On your lips dwells the icon kiss’s cold

On your brow – the cold sweet … Don’t forget!

On the Red Square, I’ll wail without end.

For a long time, the Requiem poem cycle – a collection of poems from various years permeated with an almost-primordial horror and pain – existed only in the memories of those whom Akhmatova trusted. They were the only ones she confided her secret in. In 1962 Novy Mir magazine published Solzhenitsyn's novel One Day in the Life of Ivan Denisovich – and it changed everything. 'Everyone must read this novel and learn it by heart – every citizen of the two hundred million people living in the Soviet Union,' Akhmatova said to her friend Lidia Chukovskaya. Only then was she able to commit the Requiem cycle to paper – dozens, perhaps hundreds of people spread the pages containing its typed lines. They were written down for the first ever time in the translator Nina Glen's flat on Sadovaya-Karetnaya Street. In December 1962 Akhmatova recited it into a recorder.

Notes on the cuff

The poet met Mikhail Bulgakov in Leningrad in 1933. A few years later, in Moscow, the author of A Young Doctor's Notebook helped her write a letter to Stalin requesting the release of her son and her husband, Lev Gumilyov and Nikolai Punin. He lived in Nashchokinsky Pereulok at the time, close to Akhmatova's good friend Osip Mandelstam. Bulgakov recited excerpts of his novel The Master and Margarita there. Early drafts of the work featured a writer referred to as comrade Dant. Literary scholars believe that she is based on Anna Akhmatova, whose profile was greatly admired by artists. She often visited the writer's widow Elena, who had moved to Nikitsky Boulevard. They read the novel together, and Akhmatova recited a poem on the 25th anniversary of the writer's death:

'This, not graveyard roses, is my gift;

And I won’t burn sticks of incense:

You died as unflinchingly as you lived,

The first door from the entrance to the right, opposite the kitchen entrance, overlooking the courtyard – this is where Akhmatova lived with the Ardovs. She met them through Mandelstam as they were his neighbours in Nashchokinsky Pereulok. This acquaintanceship grew into a deep friendship. Here, in 1941, Akhmatova met Marina Tsvetaeva. Up to that point, they only knew each other by reputation but still dedicated poems to each other. Much later, in 1957, the very same room is where Akhmatova told Tsvetaeva's daughter Ariadna Èfron about her meeting with the fellow poet. From Ordynka she moved to the sanatorium near Domodedovo where she spent her final days.

A monument to the poet was erected here in 2000. The sculptor Vladimir Surovtsev based his work on a painting by Modigliani.

Akhmatova's first visit to Moscow was in 1912, she went there with her husband Nikolay Gumilyov. She met Valery Bryusov in the office of Russkaya Mysl magazine. She also formed an acquaintance with Andrei Bely.

Akhmatova had a deep love for Moscow. She often went to Kolomenskoe to admire the Church of the Ascension and dedicated poems to it.

Joseph Brodsky often visited Akhmatova in Moscow. He wrote, 'There were people around her every day – in Leningrad and in Komarovo. In Moscow it became what was known as Akhmatova's crowd'... Akhmatova was, in fact, homeless – she often referred to herself as 'shepherdless'. Those who knew her called her 'the roving queen'. And it's true that whenever she entered someone's flat she had the air of a wandering empress. She moved housing around four times a year: Moscow, Leningrad, Komarovo, Leningrad again, Moscow again.

Several years ago, the House of Antique Books on Nikitsky Pereulok unveiled a memorial space dedicated to Akhmatova. It hosts a collection of authentic belongings from the period she spent living with the Ardovs.