Characters of Bulgakov's novels on the streets of the city 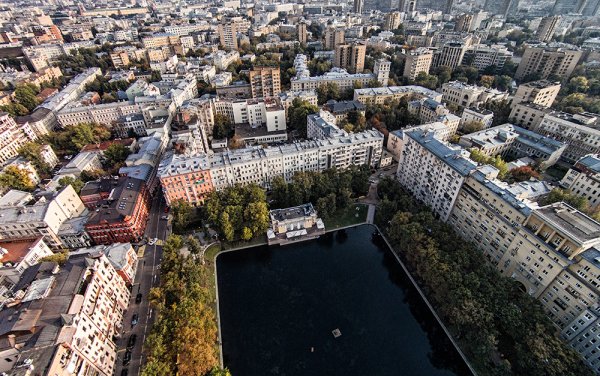 'They read your novel,' the Master heard these words from Woland, offering to show him the main character of the manuscript. To meet characters from Bulgakov's novels, all one has to do is to walk along the streets of Moscow.

'"The ball!" shrieked the cat piercingly, and just then Margarita cried out and shut her eyes for a few seconds. The ball fell on her all at once in the form of light and, with it, of sound and smell. Taken under the arm by Koroviev, Margarita saw herself in a tropical forest. Red-breasted, green-tailed parrots ﬂuttered from liana to liana and cried out deafeningly, "Delighted!" But the forest soon ended, and its bathhouse stufﬁness changed at once to the coolness of a ballroom with columns of some yellowish, sparkling stone.'

The swiftly changing scenes of the gala that Woland arranged unfolded not in a palace but in communal flat No. 50 in the Bolshaya Sadovaya street. Through entrance number six, on the fourth floor, and next to violent and quiet drunkards as neighbours – the author himself lived in a similar setting and released his emotions in the pages of his books. In the Bootleg Lake, he tried to read Mark Twain but failed, distracted by a rooster calling in the night. And in The Master and Margarita, he decides to hold a ball in the rooms of the flat, after being impressed by a visit to the US Embassy.

In 2007 a museum was opened in the 'The bad little flat'. The museum showcases the writer's study and a kitchen with Primus stoves and other artefacts of the 1920s. The museum's guests can listen to a concert in the drawing room and take the required picture in the staircase where the walls are covered densely with inscriptions from Bulgakov's fans.

The old Patriarshiye Ponds have a rich history behind it – the street used to host the residence of Patriarch Hermogenes of Moscow, hence the name. There were three reservoirs here, but with time only one remained non-swampy. A park was laid out around it, and a green oasis appeared in Moscow's heart. The spot was equally adored by artists and writers. Vasily Polenov and Vasily Surikov used to live here, and Leo Tolstoy sent Levin to the Patriarshiye Ponds to look for Kitty in his novel Anna Karenina. The place is also where the Master and Margarita novel starts: 'At the hour of the hot spring sunset two citizens appeared at the Patriarch’s Ponds.'

Everyone who reads the novel knows what happens next — a stranger would interfere with a dispute about Christ between Mikhail Berlioz and Ivan Bezdomnovo and promise that 'This evening there will be an interesting story at the Ponds.'

Today there is a distinct sign to remind visitors of the novel. It features three figures clearly resembling Woland, Koroviev and Behemoth. And a plate fastened under the sign warns: 'Never talk to strangers'.

They Will Sing First

'I suppose now the house of Kalabukhov is lost indeed,' Professor Preobrazhenskiy exclaimed sadly in Heart of a Dog. The address where the main character of the novel lived is a familiar one, even today – the corner of the Prechistenka Street and Chistyy Pereulok, tenement building No. 24/1. This is where the writer's uncles – medics Nikolay and Mikhail Pokrovskiys – used to live. They took care of their nephew when he came to Moscow in 1916. Later Mikhail Bulgakov 'borrowed' Nikolay's features to create the image of Professor Philip Philippovich Preobrazhenskiy. The writer also 'upgraded' the Professor's flat, adding a festive marble entrance hall and a porter by the door of the neighbouring Yakov Reik's tenement building, which Bulgakov often visited as a guest.

The House where Dreams Lived

A medieval castle in the heart of Moscow: could it be possible? Of course it can, if love is involved. A villa of bright stone adorned with towers and lancet windows was built by architect Fyodor Schechtel, commissioned by Savva Morozov. The art patron wanted to bring joy to his beloved wife Zinaida. After his death she no longer wished to live in the villa and sold it to the Ryabushinskys. However, the purchase brought them no joy – the villa is rumoured to be haunted by the ghost of Savva Morozov.

The house on the Spiridonovka Street perfectly fits the description in the book: a fenced Gothic villa with a private garden. Although the house is located far from the Arbat Street, it is easy to image Margarita languishing in these beautiful walls and striving to meet her Master.

A Novel with a Sequel

Bulgakov had a lifelong, loving relationship to the Moscow Art Theatre. In 1926 the play The Days of the Turbins was forged from his novel The White Guard. When the theatre's director Vershilov invited the writer to discuss the staging the book, the writer brought drafts he had prepared in advance. The work comes to a boil. However, the plot spun against the writer's will – Stanislavski wondered why the theatre would decide to stage a play about the war, and Lunacharsky wrote a letter where he called The White Guard 'an extraordinarily mediocre' play that intertwines the military buzz with dull scenes of everyday life. Still, the play was staged, turning out to be a success. With The Days of the Turbins, Bulgakov made the first step as a playwright, and the Moscow Art Theatre experienced a landmark event. Later the theatre attempted to stage Flight and The Cabal of Hypocrites, and the writer transferred his inner turmoil to the pages of the Theatrical Novel.

A House Opposite the Kremlin

'At sunset, high over the city, on the stone terrace of one of the most beautiful houses in Moscow, there were two: Woland and Azazello.' The characters from The Master and Margarita examined the capital's suburbs from the Pashkov House. The distinctive villa in the Vozdvizhenka Street was built by architect Vasily Bazhenov and commissioned by Captain Petr Pashkov. In the mid-19th century the villa hosted collections from the Rumyantsev Museum, and in the early 20th century the building was assigned to the National Library. Today the Pashkov House is as enchanting in its simple but elegant beauty as it was during Bulgakov's time.

'Six horses, warmed up from running with hats on their heads, coloured green and scarlet, are galloping away,

a black rook on their heals...': Can we discern any Bulgakovism from the words of the song Green Carriage? Well, why not? In the novel, Margarita, after being ordained as a witch, returned to Moscow in an open Lincoln steered by a rook in an oilcloth peaked cap and long gauntlet gloves. Today the car is parked in the Sivyakov Pereulok, but there are some differences. In the version by sculptor Alexander Rukavishnikov, there are two passengers in the car: the Master and Margarita. And there is more, even the convertible's design itself is remarkable. It has a huge eye instead of a speedometer, the steering column looks like a tropical pineapple, and the windshield looks like two sewing machines colliding. The tyre treads show they have clearly migrated from the gambling table – we see a deck of cards – while the front wings of the car are replaced by swan wings.

It Flies and Falls

In the late 1990s it was decided to install a monument to Bulgakov in the Patriarshiye Ponds. Where the alleys cross, sculptor Alexey Rukavishnikov would install a bench with Bulgakov sitting surrounded by Pilate, Yeshua, the Master, Margarita, Koroviev and Behemoth. The composition would be crowned by a massive Primus stove in the pond. However, locals were not especially fond of the idea and reasoned that such a large-scale project would drastically change the image of the district. Instead, a monument to the writer was installed at a different location. The usual cigarette between the lips, Bulgakov seems to be floating in the air supported only by opened books. The bronze pages feature characters from his books. Naturally, Margarita is there too, flying on a broom to the Witches' Sabbath.