Discover the Moscow of Joseph Brodsky 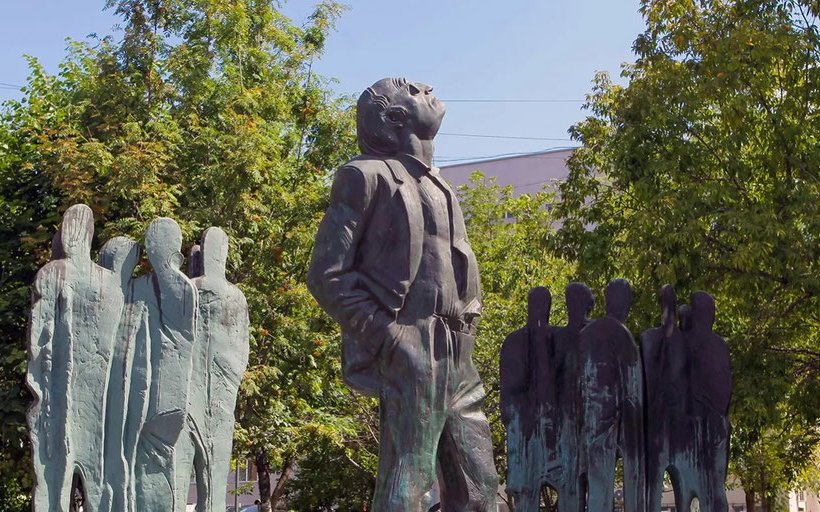 Of course, this name is most closely related to Saint Petersburg. Still, there are places in the Russian capital the poet visited as well.

From nowhere with love

In 2011, a monument was installed across from the US embassy building. The poet stands with his eyes closed and head thrown back up, holding his hands in his pockets. He is surrounded by 13 murky faceless silhouettes. The composition designed by sculptor Georgy Frangulyan and architect Sergei Skuratov is deeply symbolic. The poet faces the embassy of the USA, the country where he lived for many years. A long dozen nameless figures gazing at him from the back represent the regime that forced him to leave his home country. Although Brodsky merely visited his friends in Moscow without ever residing in the city, the monument dedicated to him fits in the scenery. And, in a way, it resembles another local piece of urban art: the monument to Osip Mandelstam. It is located at the intersection of Starosadsky Lane and Zabelina Street near the house where his brother lived, whom he visited at times.

Joseph Brodsky used to visit Malaya Filevskaya Street where translator Andrey Sergeev dwelled. They had known each other before they met in person. The translator was told about the young poet from Leningrad by Anna Akhmatova. A few years later, Sergeev read his poems. These were typescripts of 'Christmas Romance', 'The Hills', and 'Isaac and Abraham'. Sergeev was astonished. Akhmatova made efforts to make the poet stay in Moscow knowing that things were heating up against him in Leningrad. In 1964, Sergeev and Brodsky finally got acquainted. Their common interests became clear immediately. Andrey Sergeev translated several works of Robert Frost into Russian. Brodsky, in turn, was his huge fan. He wrote an essay on Frost after leaving the Soviet Union.

Brodsky maintained correspondence with Sergeev when he was exiled to the Arkhangelsk Region. After that, he arrived to Malaya Filevskaya street. Brodsky said that he cared about the opinion of only two people in Moscow: Andrey Sergeev and his colleague translator Viktor Golyshev.

He who comes is a mystery

Another historic spot of Brodsky in Moscow is the flat of Lydia Korneevna Chukovskaya, the daughter of the celebrated children's writer, on Tverskaya Street. Korney Ivanovich moved to the capital in 1938 and never got back to Leningrad after the war was over. The poet used to come to Lydia and then go to see Anna Akhmatova, who was ill at that time, blessedly, getting better. Lydia Chukovskaya was worried about the people calling Brodsky every day in Leningrad asking him to leave the country in an unpleasant manner. "They say Brodsky is ill-tempered. So were Lermontov and Mandelstam," she once wrote.

Brodsky also used to visit the Ardov family on Ordynka. He visited them when Akhmatova stayed here. He would later recall their famous flat as a constant stream of people. "I don't remember laughing more than I did then, at the Ardov table. That is again one of my fondest memories," said the poet. He came here a few months before leaving Russia, in his hardest times.