85 years of the “Worker and Kolkhoz Woman” composition 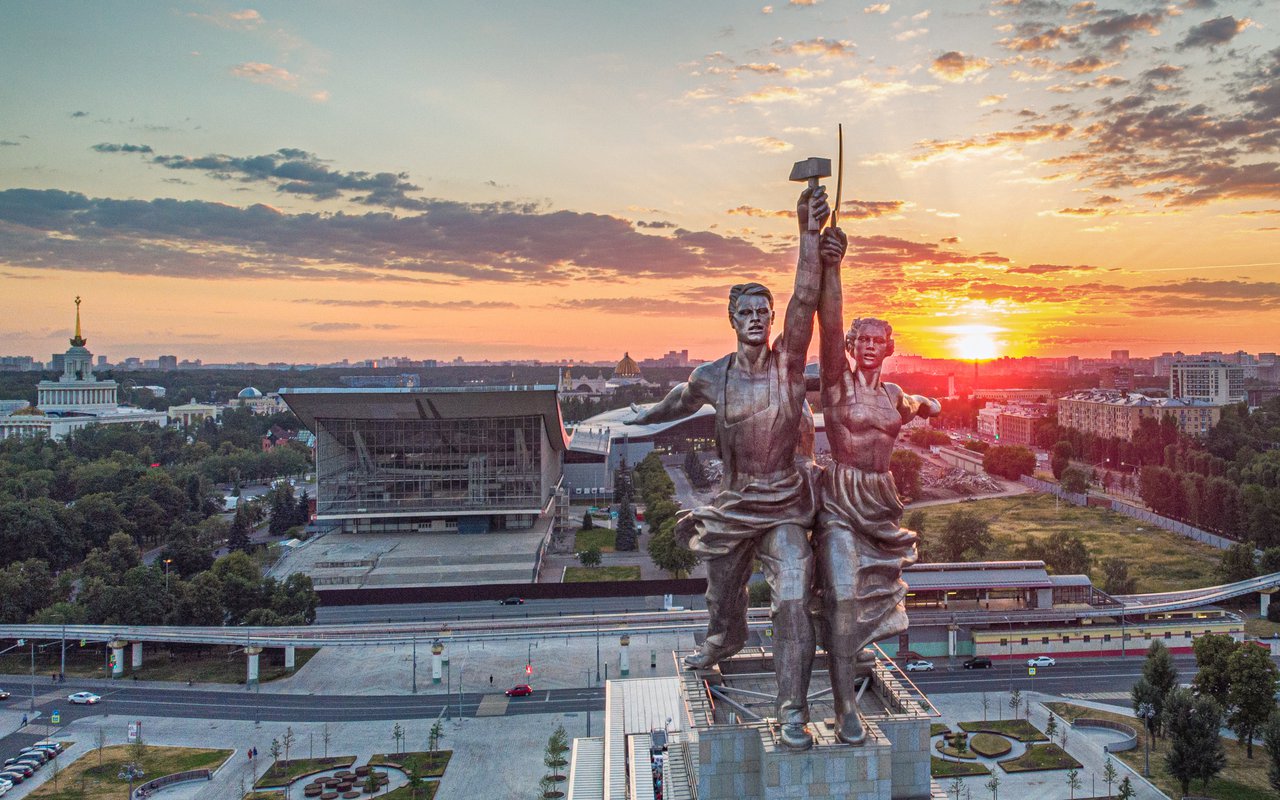 The “Worker and Kolkhoz Woman” architectural and sculptural composition crowned the Soviet pavilion at the World's Fair in Paris on May 25, 1937. The pavilion itself received an enthusiastic reception from attendees, and the sculpture became a symbol of the triumph of Soviet art and was awarded the grand prize. In honor of the anniversary of the architectural masterpiece, we have some interesting facts about the story of its creation. 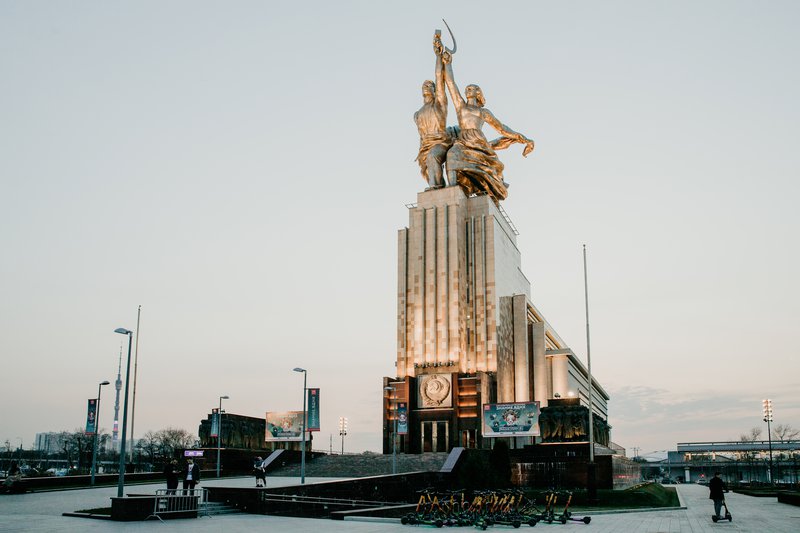 Vera Mukhina, Ivan Shadr, Matvey Manizer, Vladimir Andreev, and Boris Korolyov were invited to the competition to create a sculpture for the USSR pavilion at the Paris World’s Fair. The architect of the pavilion itself was Boris Iofan, who had already risen to fame for his design for the Palace of the Soviets.

In Iofan’s conception, the sculpture had to consist of two figures, a man modeled on “Harmodius and Aristogeiton” and a woman modeled on the “Winged Victory of Samothrace”. To convey motion, the creator used the image of flowing cloth but, unfortunately, did not get the desired effect: the composition looked bulky atop the “striving” pedestal.

Vera Mukhina also supported the decision to create “flying” elements of the composition. Considering the scale, it was not an easy task to achieve such an effect, though it was quite interesting. The long scarf was one solution: the sculptor “wrapped” the subjects for lightness and the feeling of flight. The kolkhoz woman’s billowing dress and the scarf she holds in her hand give the pair the appearance of striving forward, toward new achievements and victories.

Interestingly, absolutely ordinary citizens posed for the figures: the kolkhoz woman was sculpted based on a young telephone operator, while two men, a ballet dancer and a builder, posed for the worker. 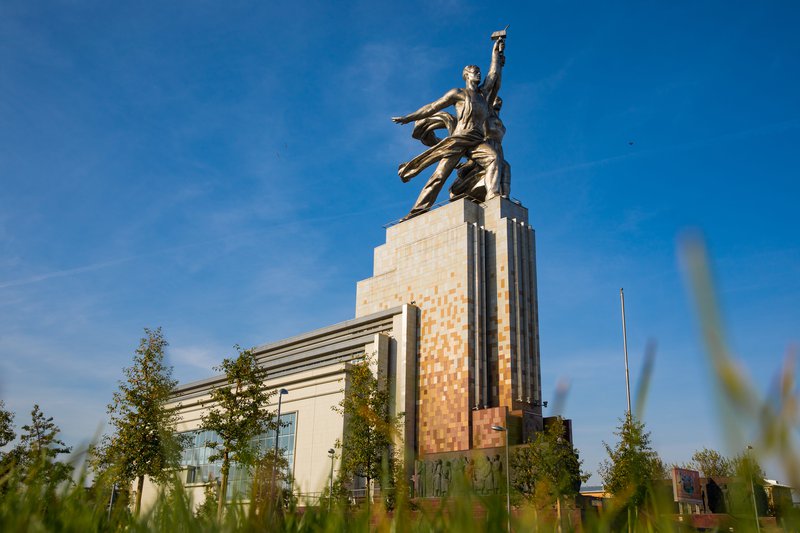 To create such a large-scale sculpture, Vera Mukhina first had to create a copy no smaller than 1/5th the size of the eventual statue to avoid errors in the design itself. There was, however, no time. Pyotr Lvov, the chief workshop engineer of the Institute for Machine Construction and Metalworking, came to the rescue. Thanks to his help, it was possible to create the full-sized version of the sculpture from a one-meter copy.

The sculpture was divided into 65 parts for transportation to Paris, where it was rebuilt in 11 days under Lvov’s supervision. 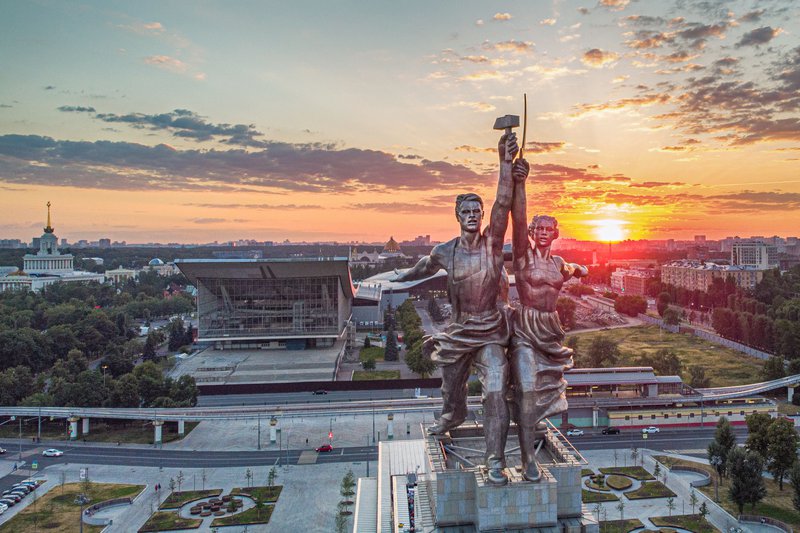 Triumph at the fair and return to the Motherland

After the end of the fair, the French wished to purchase the “Worker and Kolkhoz Woman” pavilion and preserve it in France, but Soviet leadership was against the idea. Unfortunately, the sculpture was not transported home carefully, and many parts were damaged in transit. But it was decided to reassemble and preserve the beloved pair. One proposed location for the composition was the city of Rybinsk in Yaroslavl Region (which is now the home of the “Mother Volga” statue). In 1939, it was decided to install the “Worker and Kolkhoz Woman” sculpture at VSKhV (now VDNKh). The pedestal, however, was only 10 meters tall. Vera Mukhina did not like the short pavilion at all, as it removed all sense of flight, lightness, and aspiration. The sculptor called the pedestal a “stool.”

Incidentally, “Worker and Kolkhoz Woman” became a symbol of the Mosfilm Studio, and the famous statue can be seen in the films “Tanya” and “The Foundling”. 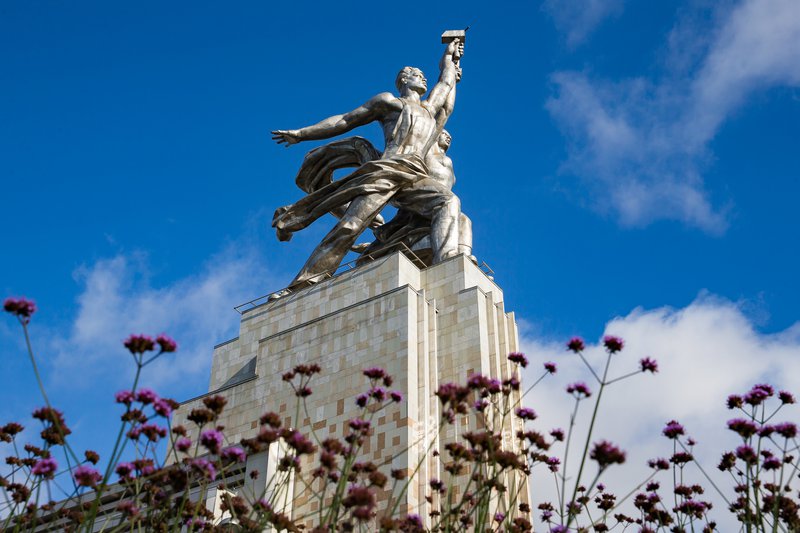 In 2003, the decision was made to restore “Worker and Kolkhoz Woman” and install it on a pedestal more befitting its status. The pedestal reaches 35.5 meters in height (10 meters taller than the original), which matches Boris Iofan’s original conception. The length of the pedestal had to be reduced to 66 meters due to space limitations. The sculptural group, now back in order, was installed in 2009 at its proper height with the help of a special crane.

Today, the “Worker and Kolkhoz Woman” pavilion hosts temporary exhibitions, lectures, and plays, as well as musical concerts on the roof, which offers a breathtaking view of the city and an unusual perspective of the statue. 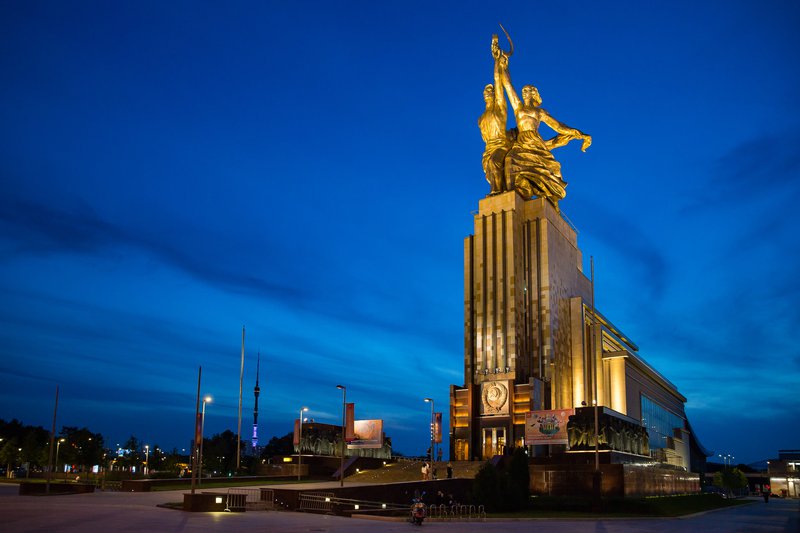 The “Worker and Kolkhoz Woman” composition is the fifth tallest statue in Russia: the statue and pedestal together are almost 60 meters tall. Victory Monument in Moscow’s Victory Park takes first place, at 141 meters, and second place is occupied by the Monument to Peter the Great (around 98 meters), which is also located in the capital at the fork of the Moskva River and the Obvodny Canal.