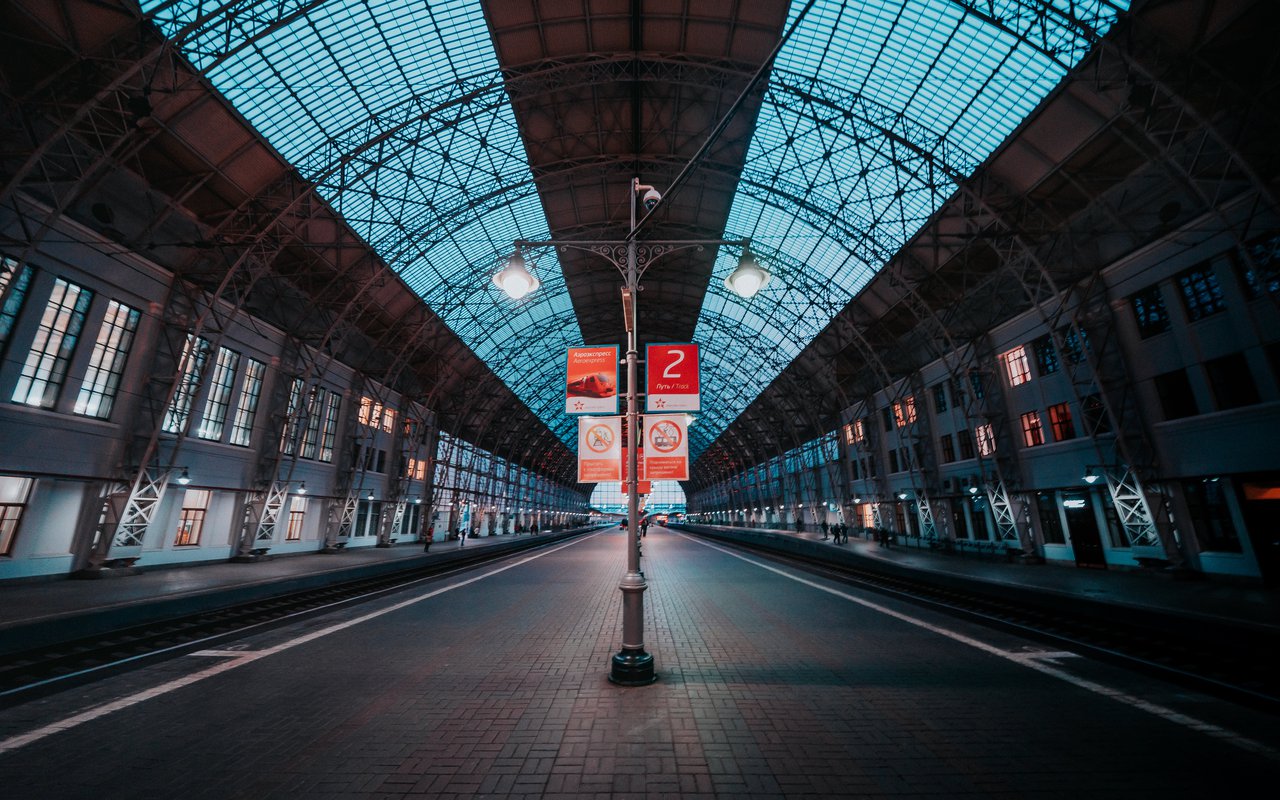 There are nine operating railway stations in Moscow. Commuter train lines link the city center with the outlying neighborhoods, the airports, and towns across Moscow Region.

Aeroexpress is a high-speed electric train service linking three of Moscow's four airports with railway stations in the center: Belorussky Station if you're traveling from Sheremetyevo, Paveletsky Station when traveling from Domodedovo, and Kievsky Station when you take Aeroexpress from Vnukovo Airport. Aeroexpress trains run every half-hour from six in the morning to eleven at night. The travel times vary somewhat between destinations but never exceed 45 minutes. Aeroexpress tickets are available for early booking via a mobile app or on-site at a station terminal. Unlike the other public transit systems, with Aeroexpress fare enforcement happens at destination when you hold your ticket to the scanner at the point of exit.

The Moscow Central Diameters are commuter rail lines crossing the city center. There are currently two Diameter lines in Moscow: D1 spans the neighborhoods of Lobnya and Odintsovo, and D2 runs between Nakhabino and Podolsk. The MCDs are part of the Metro system, so the same ticket is good for both, but mind the fare zones: the fare will cost more once you hit zone B or C outside Moscow.

Opened in 1851, Leningradsky Vokzal on "Three Station Square" by Komsomolskaya Metro station is the oldest rail terminal in Moscow. Most trains bound for St. Petersburg (including the super-high-speed Sapsan trains), Murmansk, Petrozavodsk, and other destinations in the north and northwest of Russia leave from Leningradsky Station. The suburban destinations served by the station include Khimki, Kryukovo and Klin.

Yaroslavsky is one more station on Komsomolskaya Square. Trains run east from Yaroslavsky Station. The longest rail line in the world, spanning Moscow and Vladivostok, begins here. The suburban destinations reachable from the station are Mytishchi, Pushkino, Sofrino, and Sergiev Posad.

Kievsky Station offers long-distance services from/to southwestern destinations, as well as numerous commuter trains, some of them to destinations as remote as Kaluga, and Aeroexpress trains to Vnukovo Airport.

Paveletsky Station is Moscow's gateway to the cities on the Volga, most notably Saratov and Volgograd. Commuter trains from this station travel to destinations in the south of Moscow Region, including the town of Domodedovo a few kilometres from the eponymous airport. Regular commuter trains to Domodedovo Airport leave the station every hour. High-speed Aeroexpress trains run every thirty minutes.

Savelovsky and Rizhsky Stations have no long-distance train service, offering commuting services only.