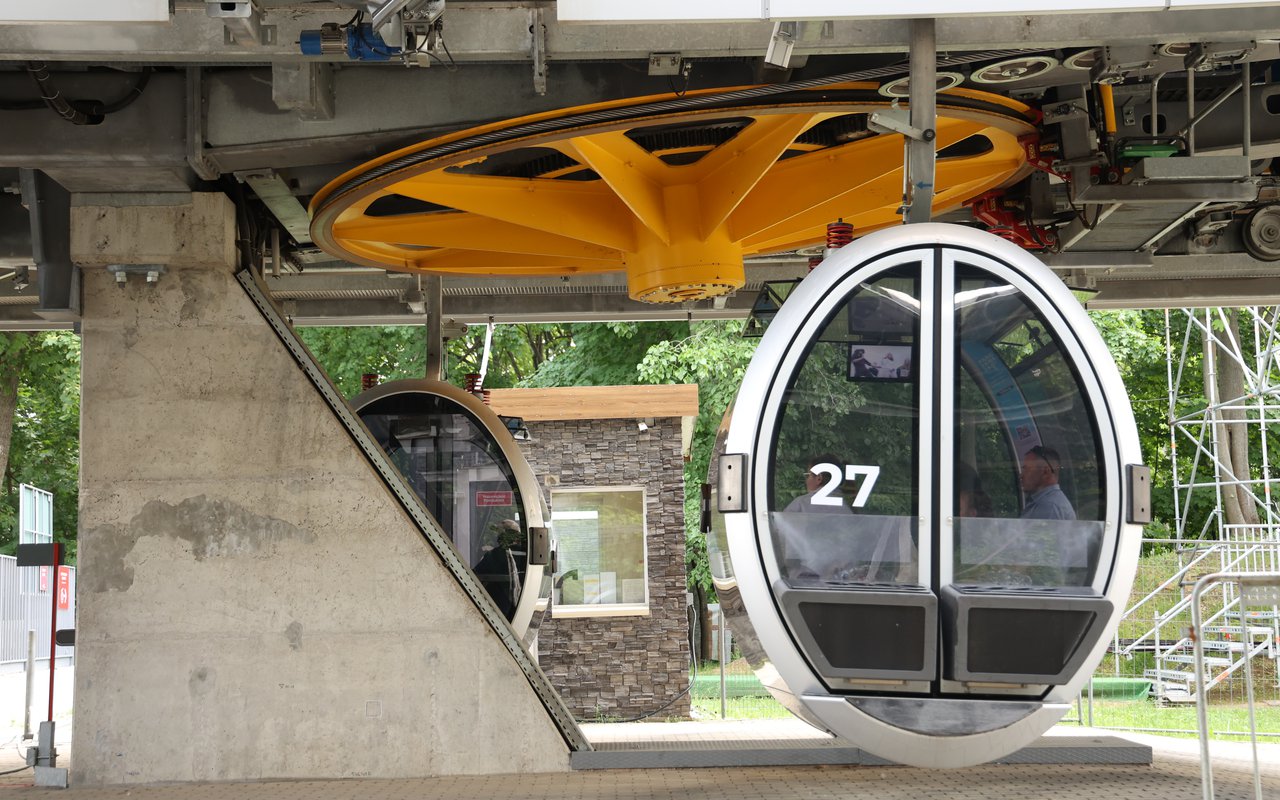 Discover Moscow visited the Moscow cable car and explains how it works and what you can do here, from getting married to going down the ski slope

What can be seen on the cable car

The Moscow cable car began operating in 2018. It has three stations: the upper one is Vorobyovy Gory, the middle one is Novaya Liga on the Vorobyovskaya Embankment (used in winter when the ski slope is open), and the lower one is near Luzhniki stadium. A one-way trip on the cable car takes 8 minutes. It soars over the Moskva River and a 360 -view of the south of the capital: the high-rises of Moscow-City, a nature reserve, and kilometers of embankments. The cable car’s route is 707 meters long.

It receives up to 1.5 million visitors per year, and the New Year holidays and the summer are the busiest seasons. A one-way trip costs 200–250 rubles, and a round trip costs 300–450 rubles.

On May 8, 2022, a Guinness world record was set on the cable car: 30 couples got married in the gondolas. After that, an official marriage registration office was opened there. 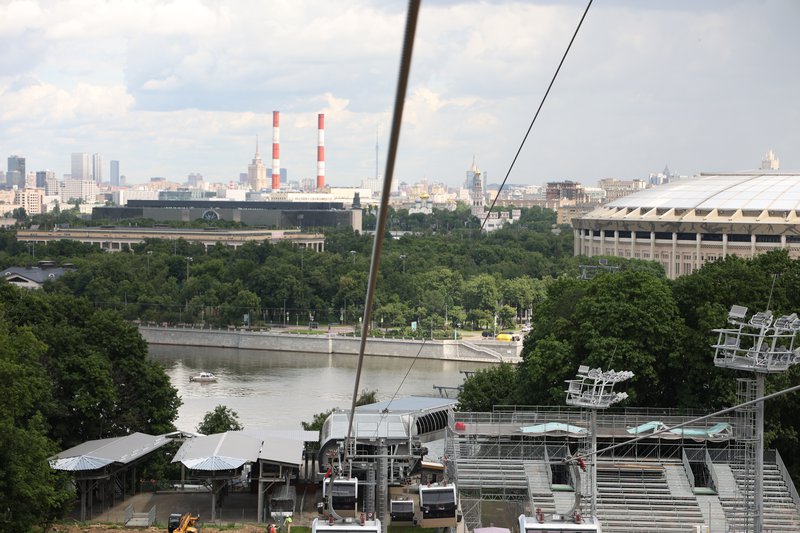 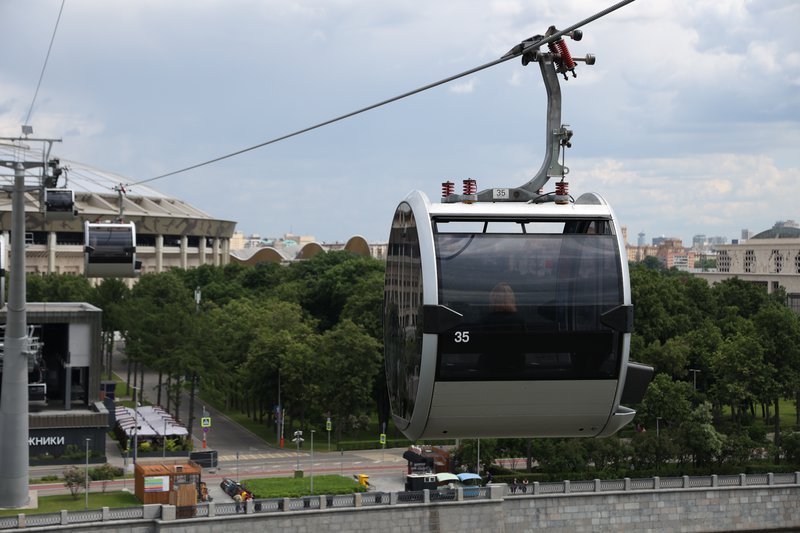 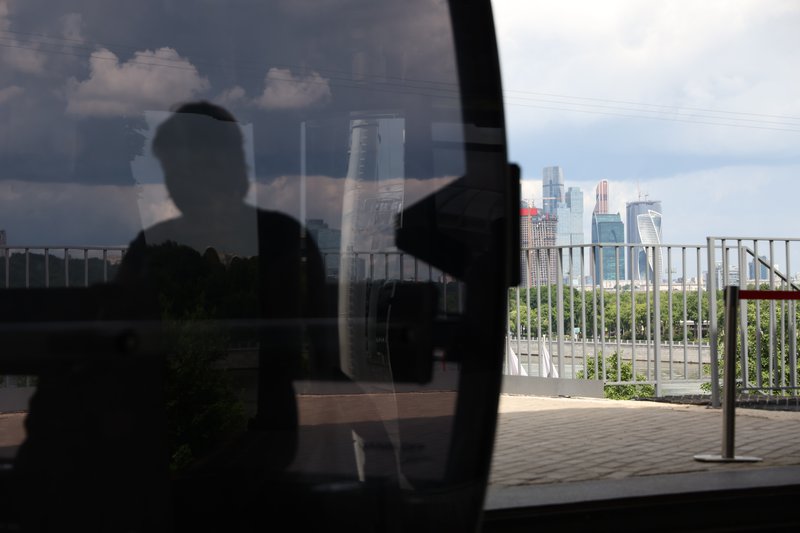 Structure of the mechanism

Every cable car is unique in length and height and has its own characteristics. The Moscow system was specially developed by the Swiss company Bartholet.

In the principles of its operation, the cable car is similar to a garland of Christmas decorations: a rope with attached gondolas (there are 35 of them) is stretched between the stations and moved by gears. For the most part, it looks like an ordinary rope, as dozens of woven metal strands make the structure durable and safe.

In summer, only closed gondolas are used, but open ones are added in winter. One of the main features of the Moscow cable car is its “quick arrow” technology. There is a sensor at the middle station which distinguishes between the gondolas and the chairs. It sends the gondolas further and turns the chairs around. Everything is automated, with no manual control. 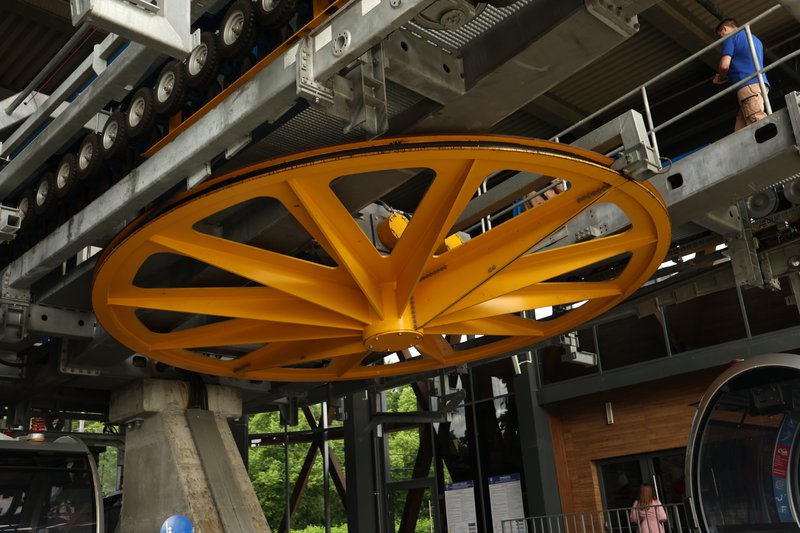 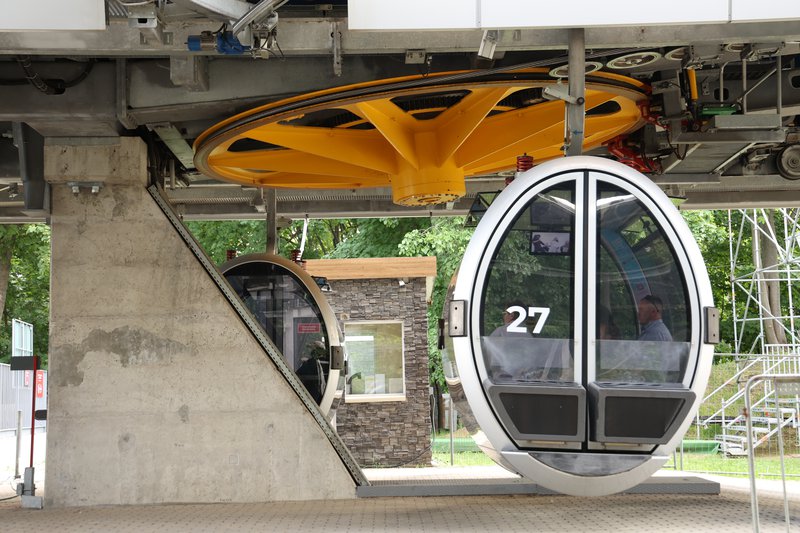 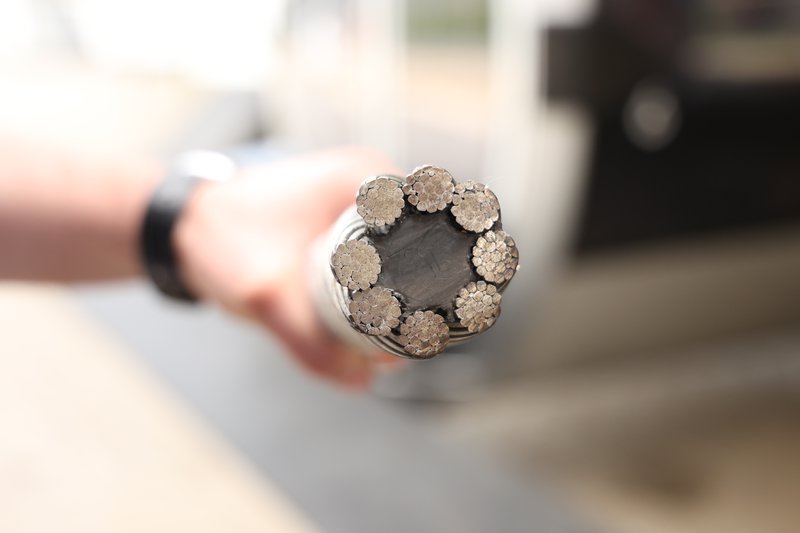 The cable car’s technical staff includes mechanics, electricians, operators, and attendants. They perform weekly maintenance, inspecting and lubricating the machinery and cables. There is a gondola garage near the middle station where they are stored and inspected and minor repair work is performed.

Only thunderstorms and strong winds interrupt the operation of the cable car. There are wind speed sensors installed at high-altitude points. If the wind gusts exceed 15 meters per second or there is a thunderstorm, the stations are closed, tickets are not sold, and lightning rods are attached to the cables. 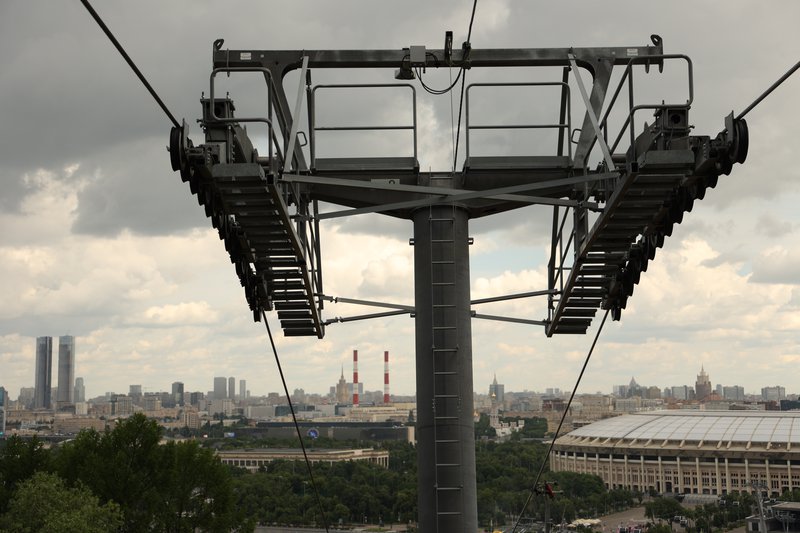 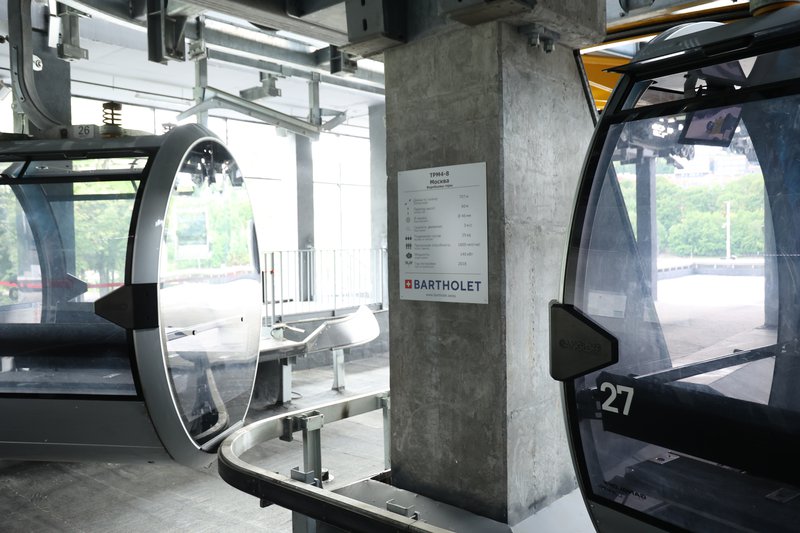 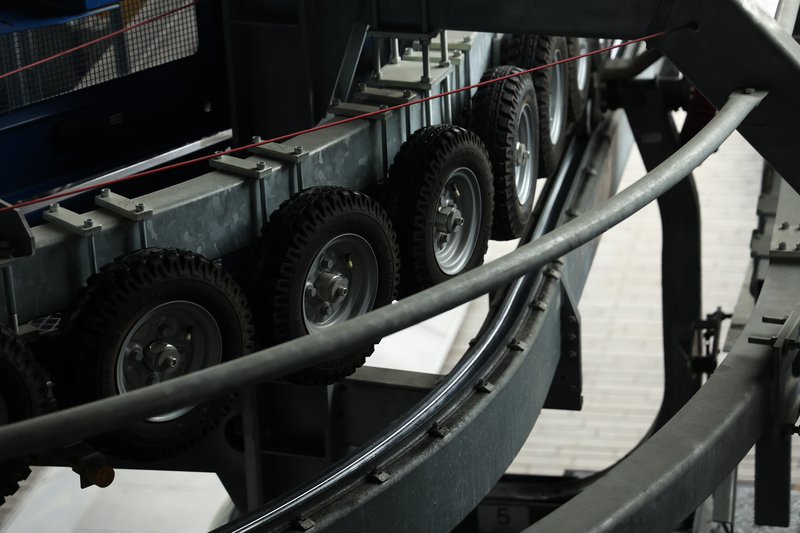 Who works there, and how 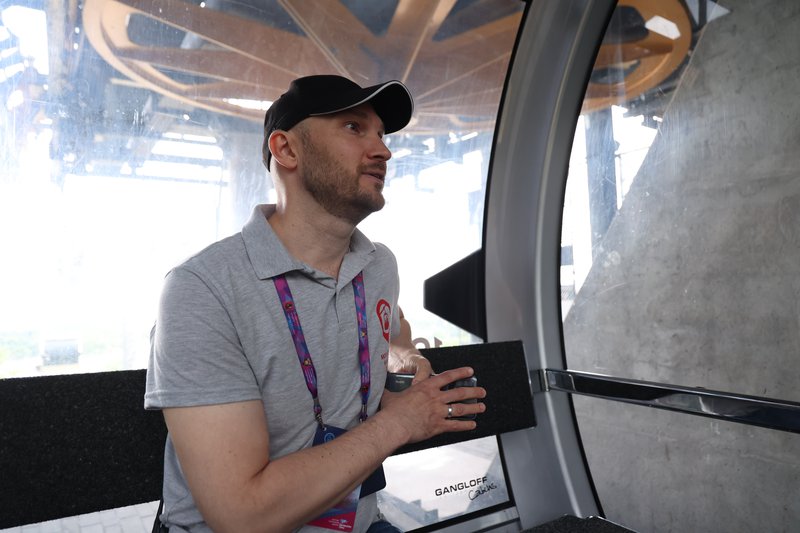 I am in charge of coordinating the cable car’s operations. This involves the coordination of personnel: cashiers and turnstile ticket collectors.

The best time to ride the cable car is in the evening, when the city is lit up and the gondola offers a spectacular view. Those are the best moments for us and our visitors. The most difficult thing is working with people. The main load falls mainly on weekends and holidays. Much depends on the weather. Even when there is heavy visitor traffic, we can fit them in the gondolas, as each one has 8 seats. There is a difficult in that, however, as many people think that they can occupy an entire gondola and ride singly or in twos. We are grateful when visitors understanding the full load of the gondolas during peak hours. This allows us to reduce the waiting time. About 1,500 people per hour can pass through the stations at peak times. 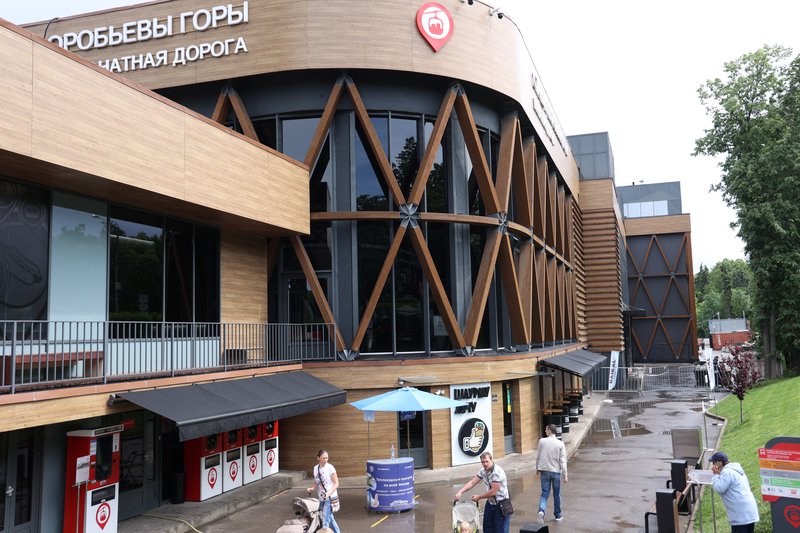 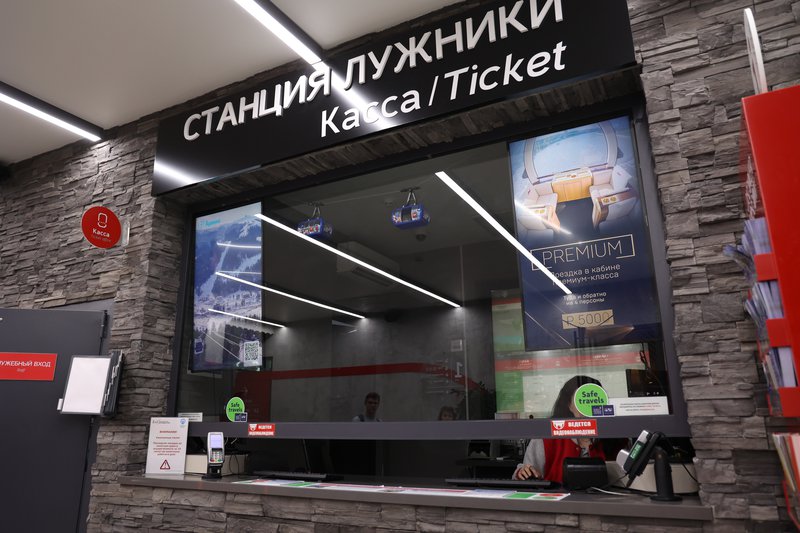 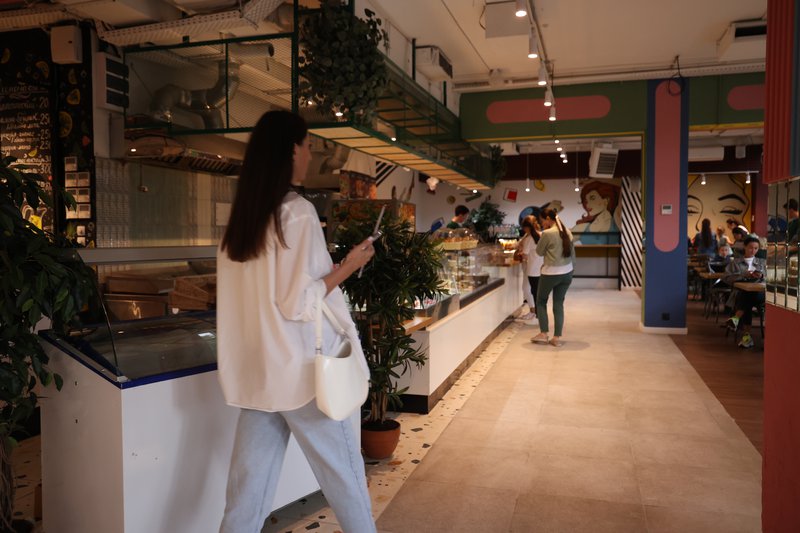 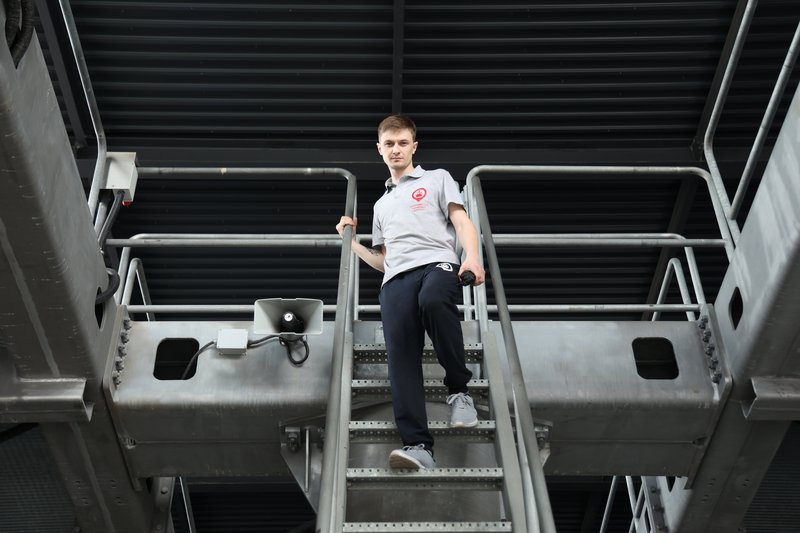 It is my responsibility to ensure safety in loading and unloading, compliance with technical standards at the station, and proper operation. There are often lines, and some people have to be persuaded to sit in a gondola with others. Many people come with children, and part of our job is to ensure that children do not get into gondolas separately their parents.

We work on a “2-by-2” schedule. There are two duty operators at each station, and we change places every hour. The duty operator must always be on the platform, even if there are no people at all or if it is 30 degrees below zero. 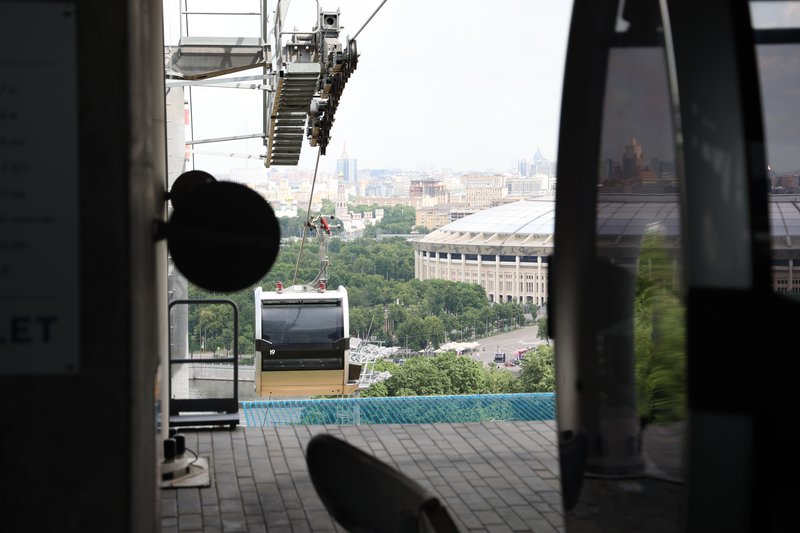 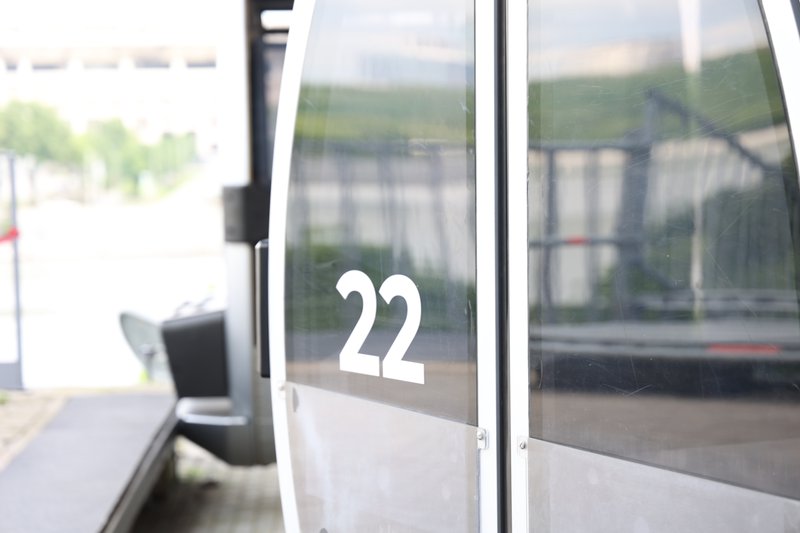 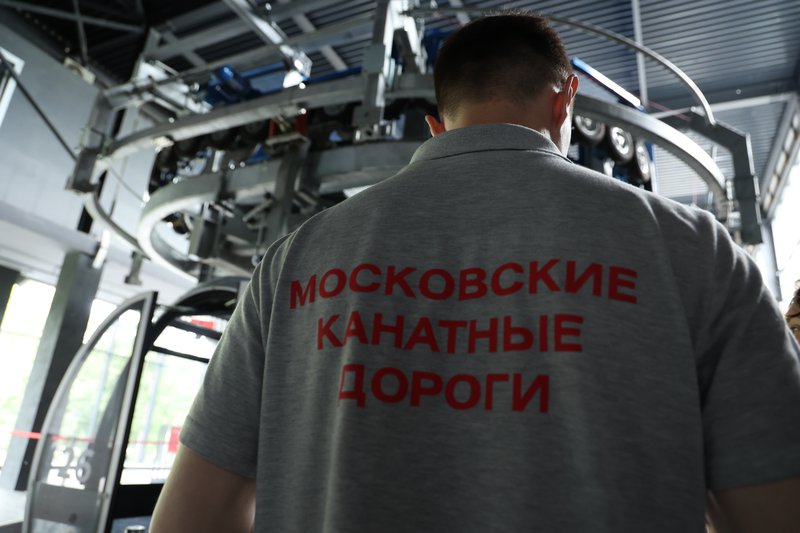 The most important thing for us is the walkie-talkie. We exchange important information with duty operators at other stations. For example, people with bicycles need to be advised quickly on how to get out, because the gondolas travel through the stations without stopping. We give our colleague the gondola number and ask them to keep a close eye on it.

We have special buttons to slow the cable car down or even stop it. For the safety of passengers, the system works instantly.

We take an exam every six months. We work out various simulated emergency situations in it. For example, if the door does not close or someone loses consciousness in gondola. In all cases, we consider the situation in which the cable car stops and cannot be restarted for more than 15 minutes. Then, by the rules, we must call a rescue team to evacuate people from the gondolas. Fortunately, we have never had any emergencies like that since the cable car opened.

The hardest part is interacting with the passengers. It is much easier to understand the technical aspects of how everything works and how it will work. People vary a lot. Some react kindly, while others boil over.

We are used to the cable car, so it is nothing new for us. We often move between stations in our work. My favorite time of the year on the cable car is twilight in the early autumn. The parks are illuminated, Luzhniki stadium shimmers with lights, and everything looks beautiful and refreshed.

From clowns to romance

The cable car is a special place — it offers a view of Moscow State University, Luzhniki stadium, and almost the entire south of Moscow. Tourists from other cities come to us, but Muscovites do not come very often.

Every day is special. We can say that the unusualness has become normal. Once, four gondolas in a row were occupied by a large group of Goths. There were also once 16 clowns in costumes with huge feet. And on New Year’s Eve, around 20 Santa Clauses came. The children were shocked: why were there so many of them?

There is also a place for romance. Weddings are held every Friday at Vorobyovy Gory station. Couples come to ride the cable car in the evening when there is beautiful twilight, the lights are on everywhere, and the gondolas are also illuminated.

We have one VIP-gondola for groups that want to ride separately from others. Negotiations are sometimes held in it. It happens that people come with papers, sign things, and make deals. But, more often, they bring champagne. 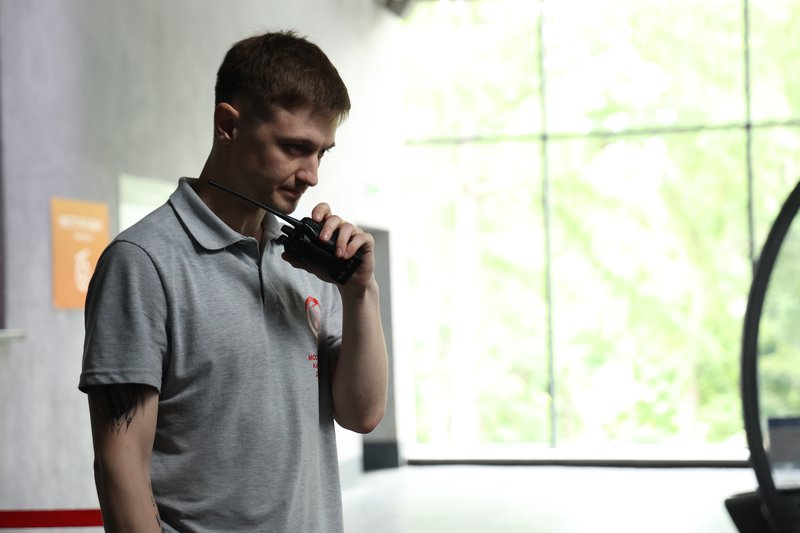 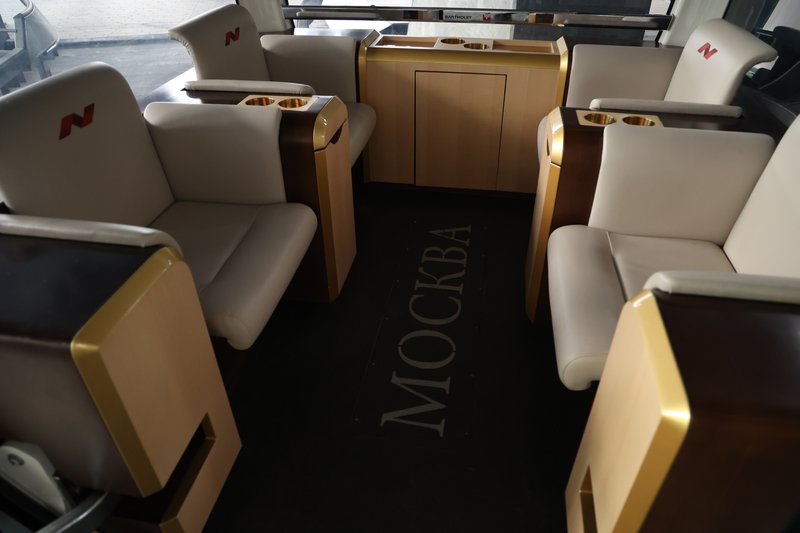 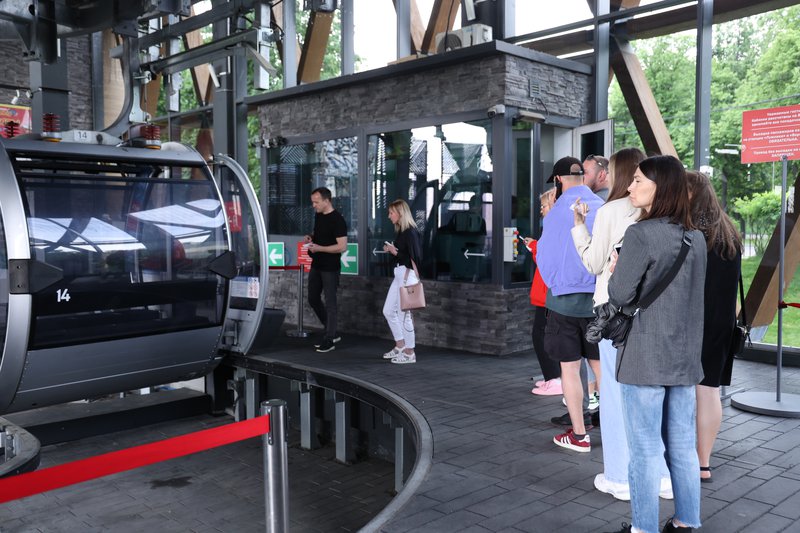 Other things to do

There is a coffee shop, a restaurant, and an exhibition at the top station of the cable car. Visitors can learn the history of Sparrow Hills, an ancient settlement from the 1st millennium BC, or about the first glass factory in Russia, which was founded on the site by Peter the Great. When guests know all this, they perceive the views from the cabin differently.

It is interesting to visit the cable car with children. They can find out why the gondolas do not fall, why the doors do not open in the air, how the cable car differs from a funicular, and much more. In this way, interest can replace their fear, if they felt any.

Since 2021, it has been possible to register marriages on the cable car. The ceremonies take place at the upper station every Friday from May to October. About 500 couples have already celebrated their weddings on the cable car. 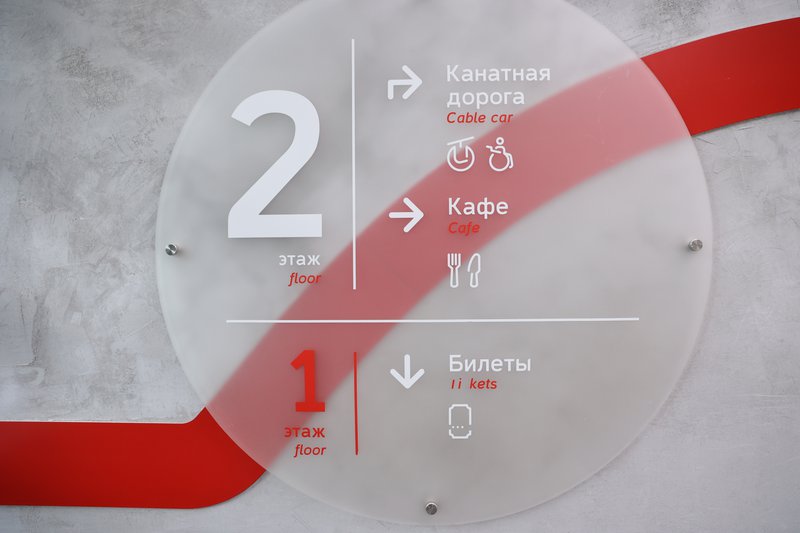 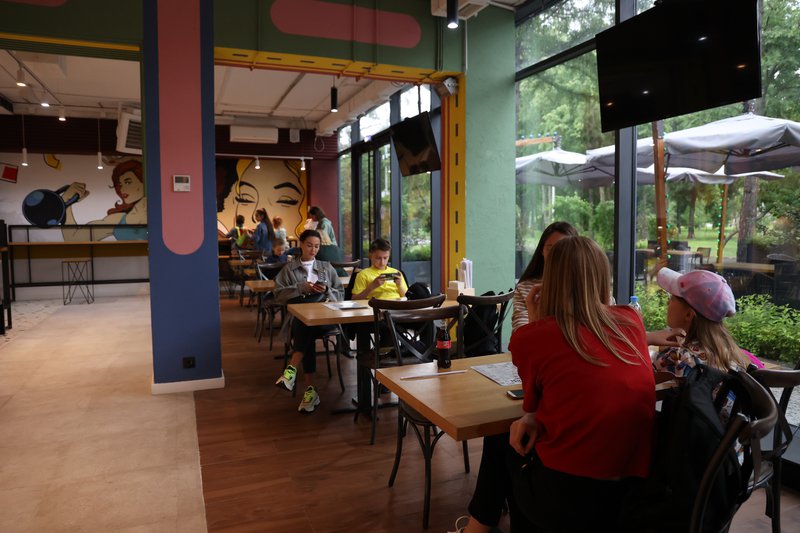 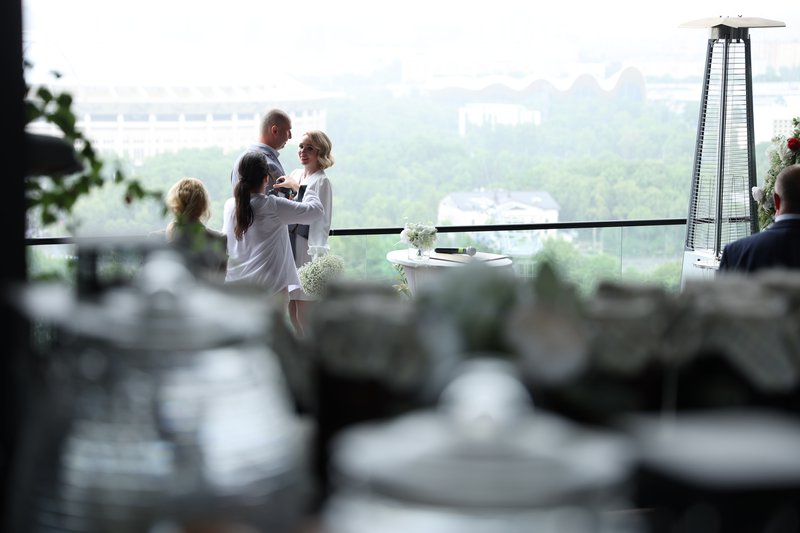 The cable car is the flagship of a large sports and tourist complex. On one side, it offers a view of the city from above. On the other side, riders can see the outlines of the future sports center.

And although the capital’s cable car is not as long as, for example, the cable car in Nizhny Novgorod, it also has something to boast about. This year, three ski slopes and two all-season ski jumps for year-round training (20 and 40 meters long) will be open below it. There is no other metropolis in the world where one can fly down an open slope in the city center. 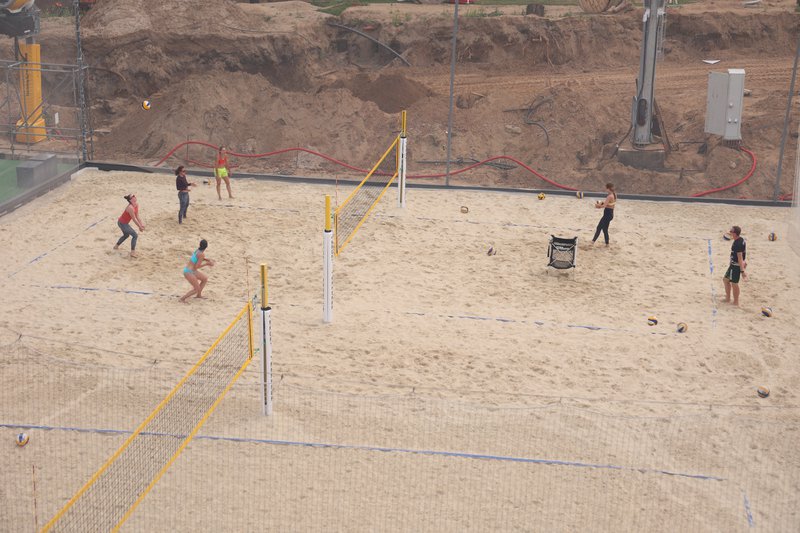 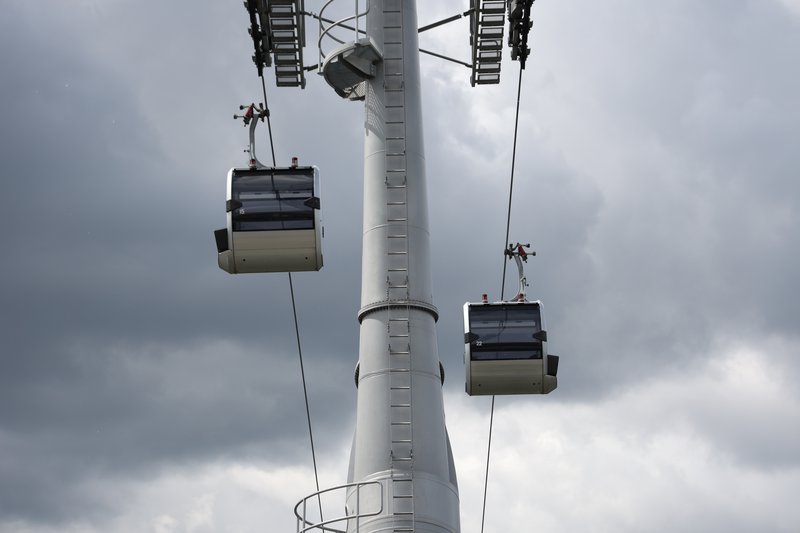 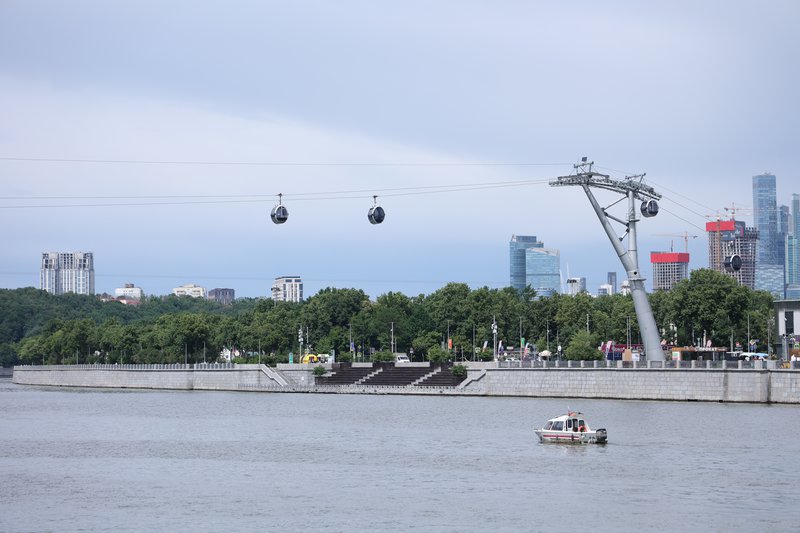 The beach sports center is already open, where visitors can play beach volleyball, and there is a skateboarding school and a ski school that anyone can visit. Skill level does not matter: everything is available from a “paddling pool” to the red track, where major competitions are held. In the future, an alley of sporting glory, children’s recreation areas, and sports grounds will open.