How fountains are built

Why would a fountain need a dungeon? 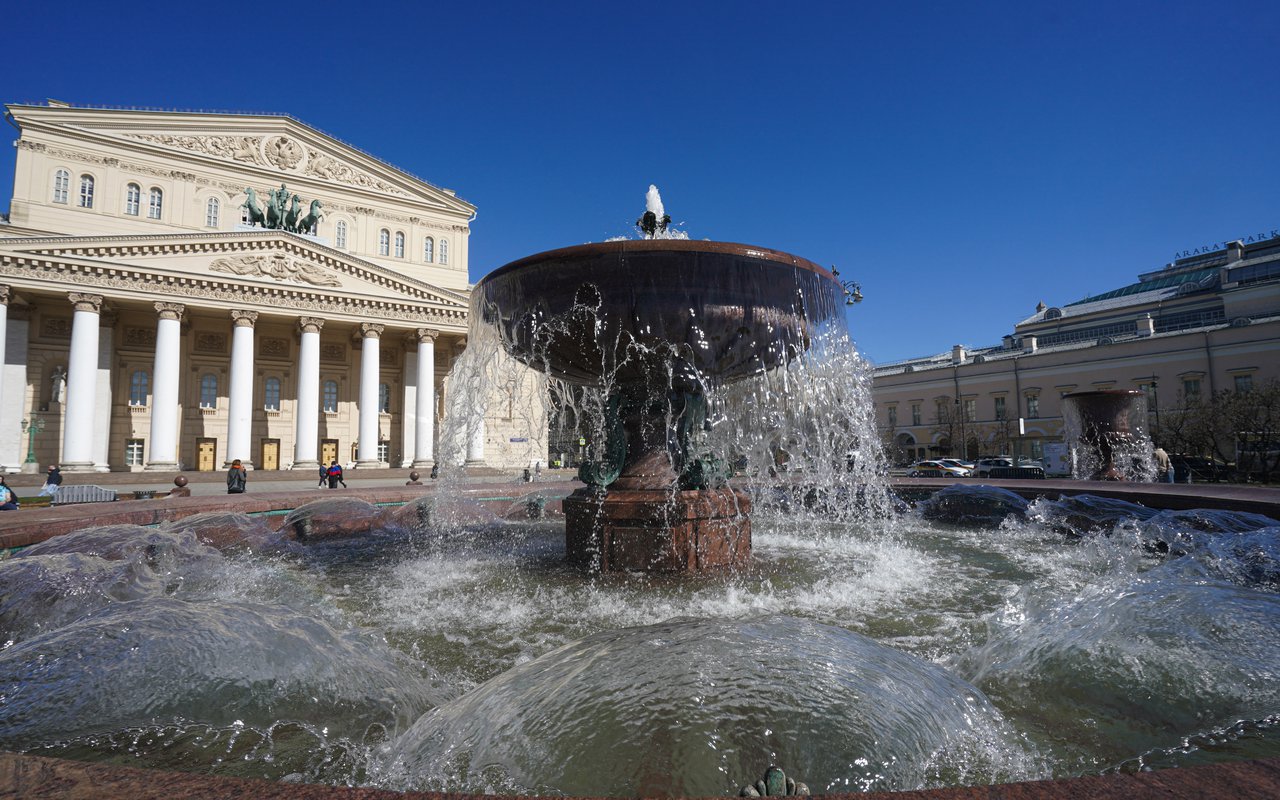 Discover Moscow went down into the fountain dungeon near the Bolshoi Theatre to find out how Moscow’s fountains are built and how they work.

How fountains are built

Moscow has more than 600 fountains and other water systems. The most iconic 97 of them are under the supervision of Gormost (the capital’s trust for the construction of bridges and embankments).

All fountains operate on the same principle, but they differ in size, architecture, basin shape, and arrangement of jets and illumination. A fountain has a superstructure and a substructure. Its basin is above the ground, and the jet-forming elements the water flows from are in the basin. They can be located vertically or horizontally and release even, winding, or foaming streams. The fountain basin is a reservoir from which the pumps circulate the water. This system is in the substructure of the fountain.

First, the water enters a suction pipeline. Then it reaches a certain pressure and speed and passes into the pressure line, where it is distributed through the pipes and emerges in the form of jets. In addition to the system of pumps and pipes, fountains also have replenishment systems and drainage systems. There is also an armature system of dampers and valves to regulate the height and inclination of the jets.

As a rule, all systems are located in special premises underground, where, in addition to pumping stations, there are service areas, inventory storage rooms, and rest rooms for employees. 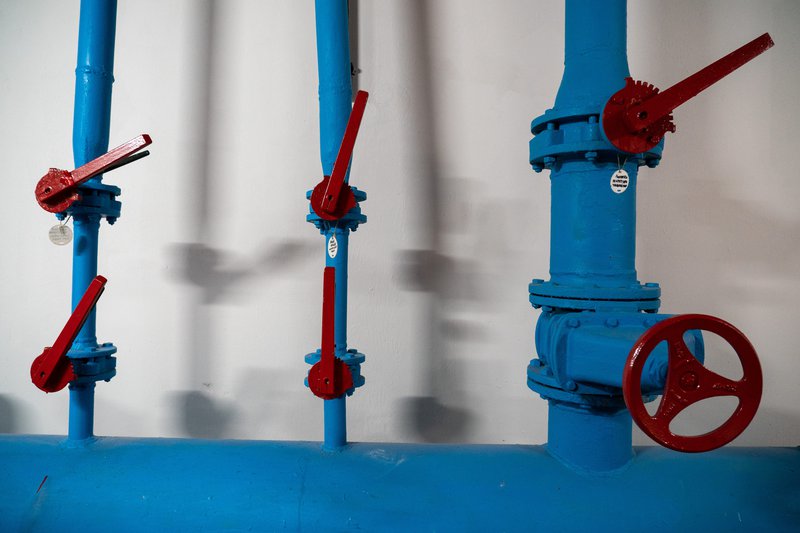 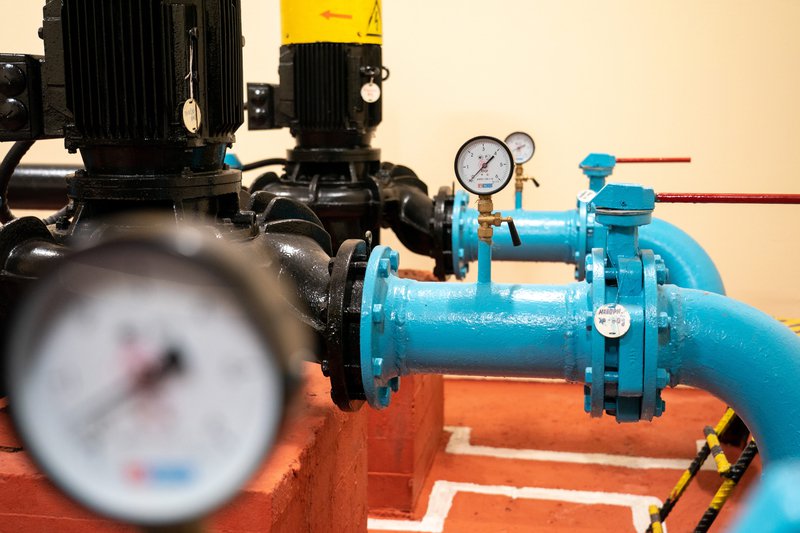 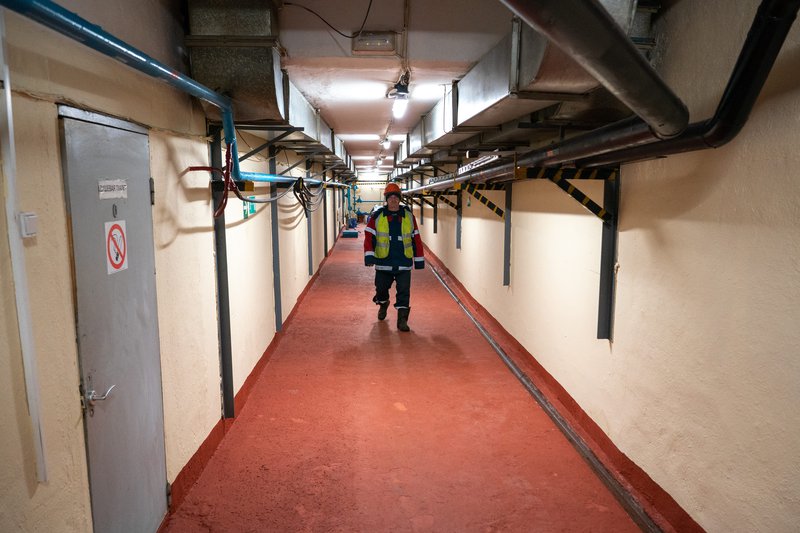 Where does the water in a fountain come from?

All water for fountains is taken from Moscow’s regular water supply system. “Some time ago, there was a plan to develop a separate water processing system for fountains, but it became clear that it would not be economical,” says Vitaly Davydov, Gormost deputy division head.

But this has nothing to do with wastefulness. After entering a fountain’s internal supply system, the water circulates from a week to a month. In the basin, the water gradually “spoils” as dust, pollen, leaves, and buds fall into it. If the fountain is in a quiet park area, it will often be visited by ducks. All this affects the quality of the water in the fountain: it can evaporate, turn green, or become muddy. The goal of good maintenance is to maintain the required color and water level in the fountain. “The ideal water for us is clear,” reminds Davydov.

How the Theater Fountain, one of Moscow’s oldest, works

The Theater Fountain consists of three basins — one central and two side basins. “The central basin is a traditional fountain. The side basins sort of resemble shot glasses, and the water does not remain in them, but immediately drains into the grate. If you get close to them, you will not see any water there, so they appear to be ‘dry’ fountains,” Davydov explains. The basins have a total capacity of 60 cubic meters, which is almost 500 bathtubs of water or six water trucks. The fountain has a total of five pumps.

The internal “office” of the Theater Fountain is located directly under the square near the Bolshoi Theatre. But even the most eagle-eyed tourist will not notice the entrance of the “dungeon.” Three people work around the clock above and below the ground every day. They are responsible not only for this fountain, but also for the Vitali Fountain opposite the theater, and for the fountain on Birzhevaya Square.

The fountain spaces are neighbors with both the underground premises of the Bolshoi Theatre and the Moscow Metro. But these very different neighbors do not interfere with one another. The story of a branched passages system in the space under the fountain is only a myth. 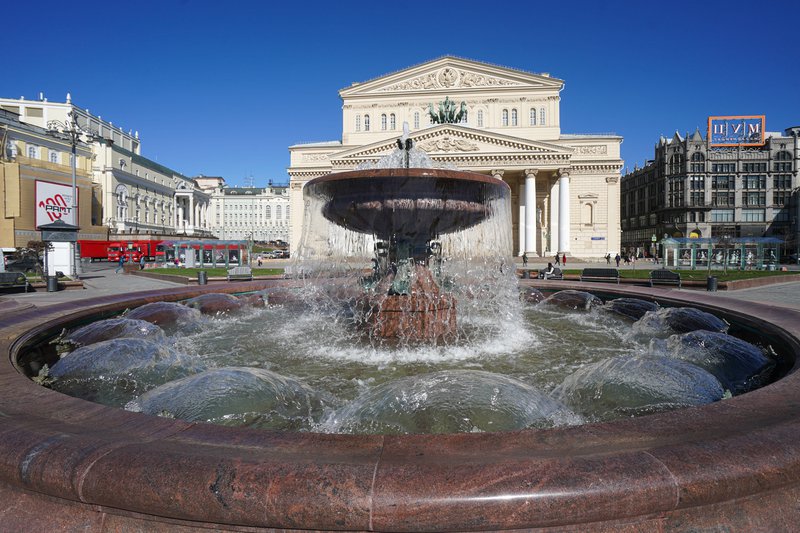 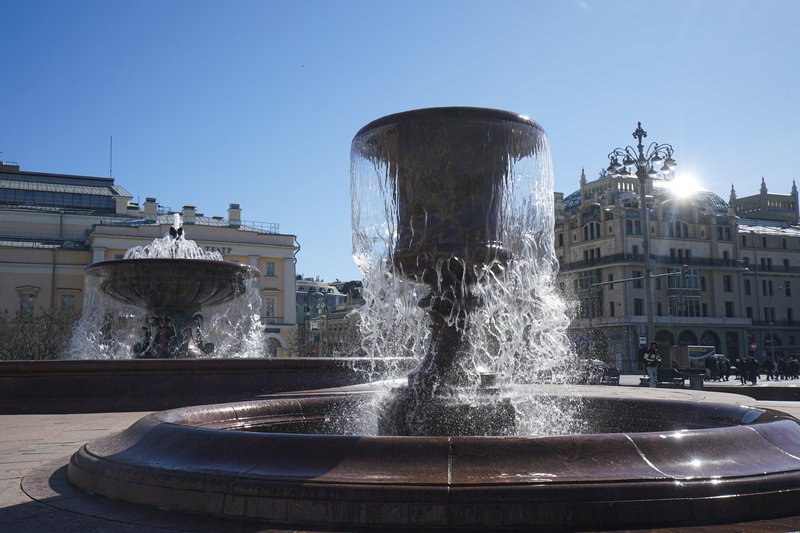 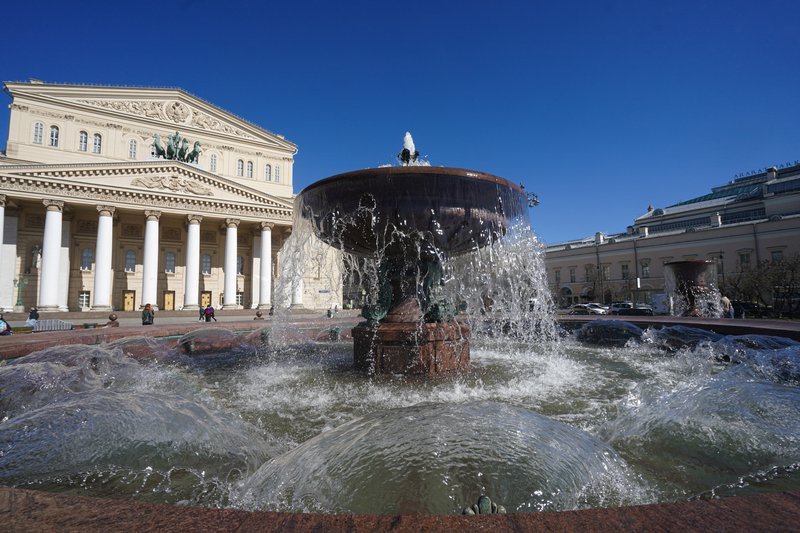 How fountains are prepared for launch

Fountain season in Moscow begins at the end of April, but the preparations begin long before that, literally the day after the end of the previous season. “From November, we begin preparing the fountains for relaunch. We stop the equipment, and we disassemble and inspect it. We repair whatever we have to and change any parts that cannot be repaired,” says Vitaly Davydov.

After the end of the season, the statues, sculptures, and other architectural elements of the fountain, mostly made of granite, have a “bath day.” They are washed with swabs and brushes with special detergents, because, as the fountain operates day by day, silt builds up on its parts, and calcium, magnesium, and other substances are deposited.

The employees of Gormost make small repairs to the sculptures themselves if it is needed, but major renovation requires specialized experts. Thus, during the renovation of the Friendship of Peoples fountain at VDNKh, professionals repaired the sheaves and figures of girls, restored the fish sculptures, and covered elements with gold leaf.

Usually, the sculptures spend the winter where they stand in winter shelters made for them. For example, the Vitali Fountain across the street from the Bolshoi Theatre “wears” a decorative glass cap.

In autumn, the water is drained from the pipe system, and the pipes are purged with air to preserve them over the winter. And in the spring, a test run begins: the water in the system is changed several times to completely clean the systems.

The most remarkable moment comes at the end of April. “All the Gormost fountains turn on at the same time. It is traditional for the mayor to open fountain season at a particular site: VDNKh, the Pushkinsky, Theater, or Novopushkinsky fountains, and so on. It is a very important event, and it takes us weeks to prepare for it. The ultimate expression of our work is the very moment of the fountains are restarted,” says Davydov. 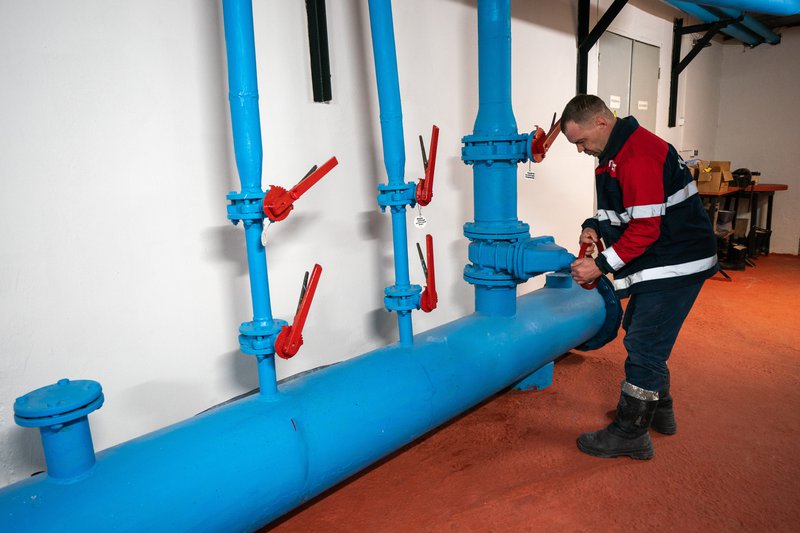 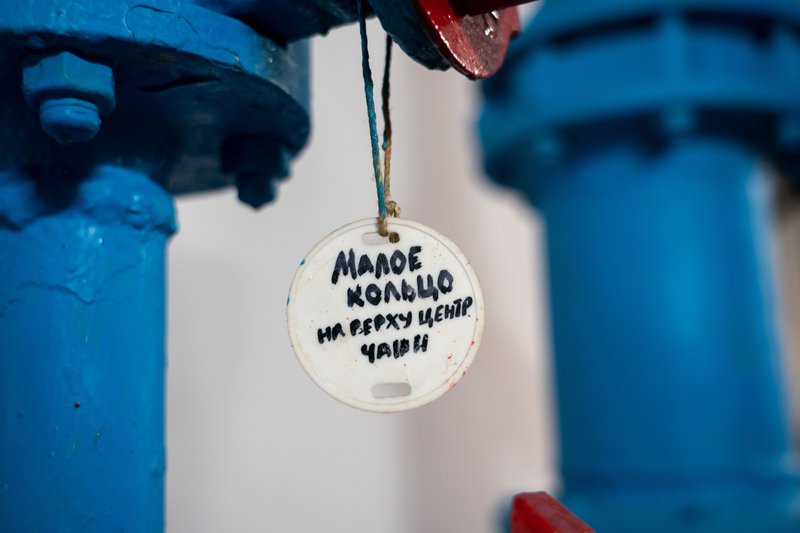 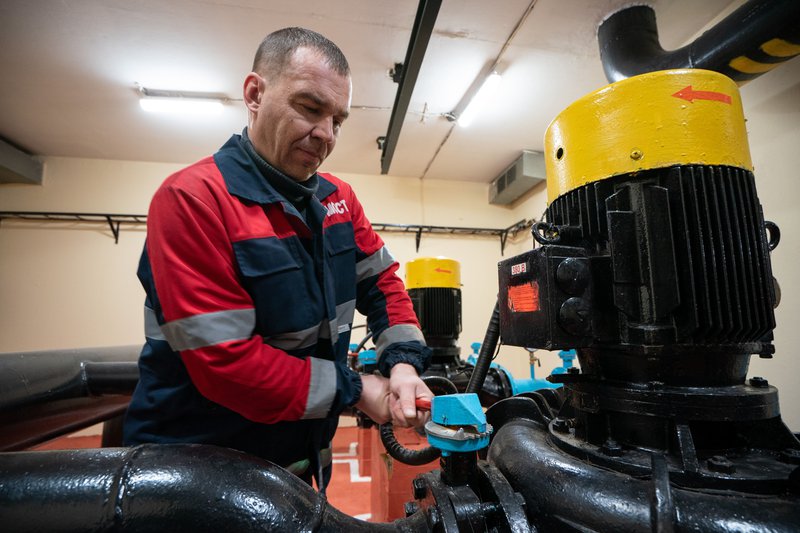 Who works with fountains

A small housing and utilities infrastructure is required to maintain a fountain. Specialists in various fields are needed there: mechanics, welders, electricians, road workers, painters, stonemasons, drivers, plasterers, machinists, fabricators, carpenters, and many others.

“Hard work is the key to our success. If we miss anything, we face challenges. When people do their jobs well, the fountains work without trouble and delight the public,” says Vitaly Davydov. He has been working with fountains for 29 years. Davydov started as an ordinary worker at the Theater Fountain. He later became the deputy head of the division and is now responsible for dozens of facilities throughout Moscow. 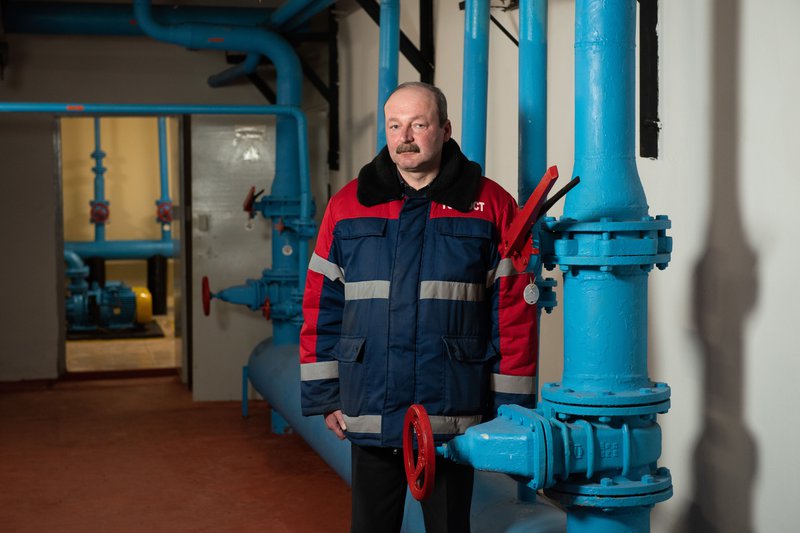 A fountain operator must have a thorough knowledge of the systems in order to operate them. Every morning must begin with the preparation of the fountain: checking the water level in the basin, cleaning the grate filter so that nothing undesirable gets into the water supply system, checking the airiness, removing debris, and inspecting all the parts of the fountain, like the nozzles, connections, and granite lining.

Fountain maintenance requires not only technical skill, but also creativity. Staff members write special programs for musical fountains, providing melodies and changes in the frequency of the fountain jets. The program controls the valve relay system: the signal opens or closes a particular water supply pipe. The result is that the jets appear to sensitively react to the sound of the music.

The significance of the fountains to the city

The fountains operate from 7 a.m. to midnight without a single break. There are still fountains in Moscow that are turned on manually, but most of them are started by automatic systems.

Every watery work of art combines graceful water and stone architecture. Each fountain has its own jet design: the proportions of the height of the water flows, the way they fall, their angles of inclination, and many other parameters. There are no special courses for fountain workers, but employees with long experience know how to create harmonious water paintings.

Moscow’s most “complex” fountains are the dynamically lit fountain in Tsaritsyno, the musical fountain in Gorky Park, and the Friendship of Peoples, Stone Flower, and Golden Ear fountains at VDNKh. Each of them has a huge basin, dozens or hundreds of jet-forming elements, underwater illumination, and automation, ventilation, air conditioning, and electronics systems. 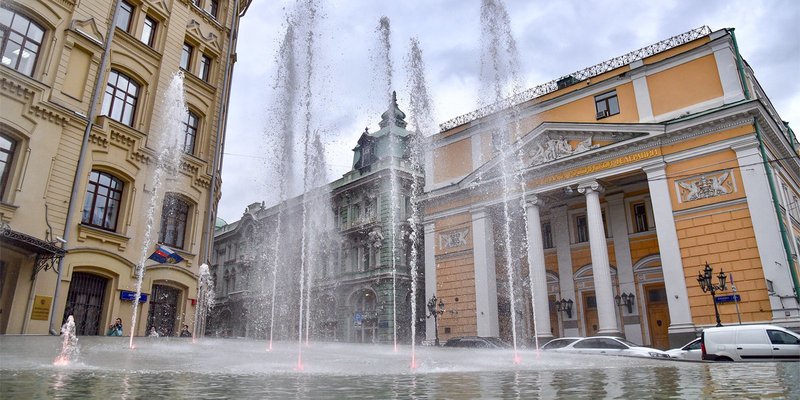 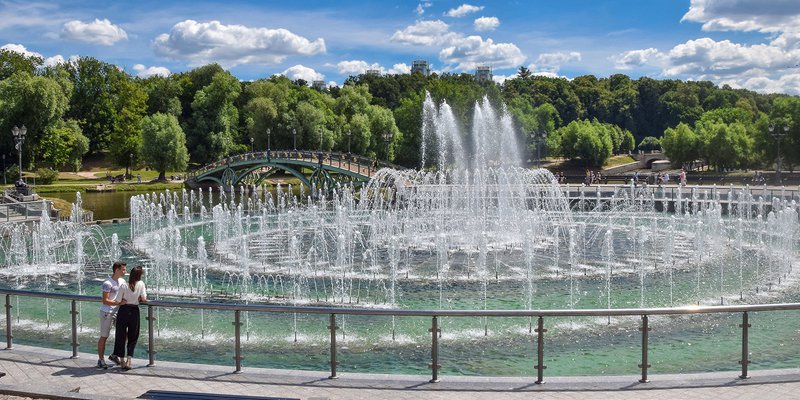 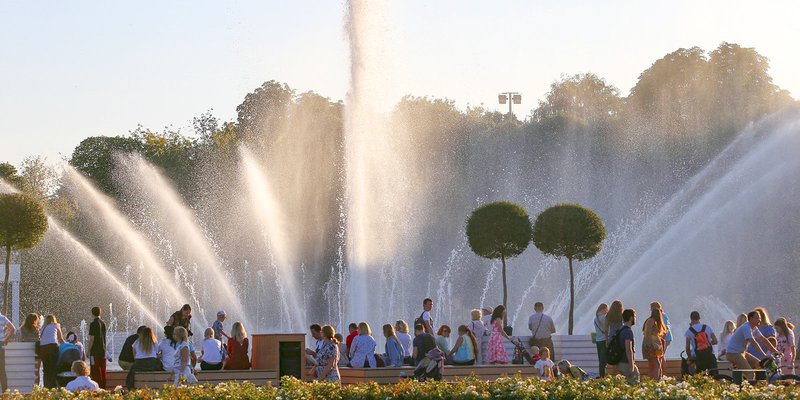 There are also fashions in the world of fountains: for example, more and more “dry” fountains, without basins, are appearing. And modern systems are becoming smarter and more ergonomic. For example, the fountain on Birzhevaya Square appeared not long ago as part of the “My Street” comprehensive improvement program, and it has the same basic structure as any fountain, but it also includes modern automation and electronics systems with air conditioning and video surveillance. There is also a soft start system to protect the pumps and a jet system with musical accompaniment.

People still often make appointments and dates at the fountains, but the tradition of throwing coins is becoming a thing of the past. And the tradition of jumping into fountains on Airborne Forces Day in August persists. It mainly happens in Gorky Park.

Why do people love fountains? Vitaly Davydov has his own answer: “A fountain is a place in a big city where you can listen to the sound of running water and see how the sunlight plays on the jets. You can just close your eyes, sit down on a bench, and get away from the city bustle and frantic rhythm of modern life. That is why people love fountains.”