A new lease on life for the constructivist masterpiece 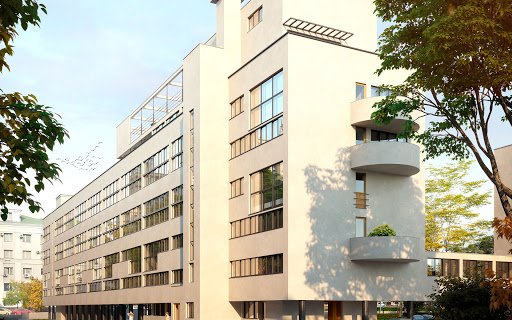 The apartment block for the staff of the People's Commissariat of Finance of the Soviet Union was built on Novinsky Boulevard in 1928-1930 to the design of Moisey Ginzburg and Ignaty Milinis. The Narkomfin House was a revolutionary constructivist project for its time: it was to pioneer a new concept of housing where the tenants would spend their free time together on the long shared balconies of the communal annex which also had an in-house cafeteria, laundry service, and gym, or on the terraced roof with a flower garden and deck chairs. What happened was that the tenants soon began to suffer from a deprivation of privacy and personal space. A few years later, Soviet authorities ended all similar architectural experiments.

The house underwent a succession of chaotic remodeling projects. Some of the public spaces lost their original function, and only a few apartments have preserved the unique original layout intact. In the meantime, the legendary building suffered from neglect and dilapidation. In 2006 it went on the list of the 100 endangered world heritage sites. Restoration of the Narkomfin House, launched in 2016, was led by Alexei Ginzburg, the grandson of the original architect. The interior and exterior décor details were restored from the book Housing by Moisey Ginzburg. The rejuvenated Narkomfin House is a premium class housing property that is nonetheless open to the public: there is a museum about the building's history on the basement floor. The former communal annex is soon getting a café and several book shops. The hallways and balconies of the building can be explored on a tour: tours are offered on a regular schedule.