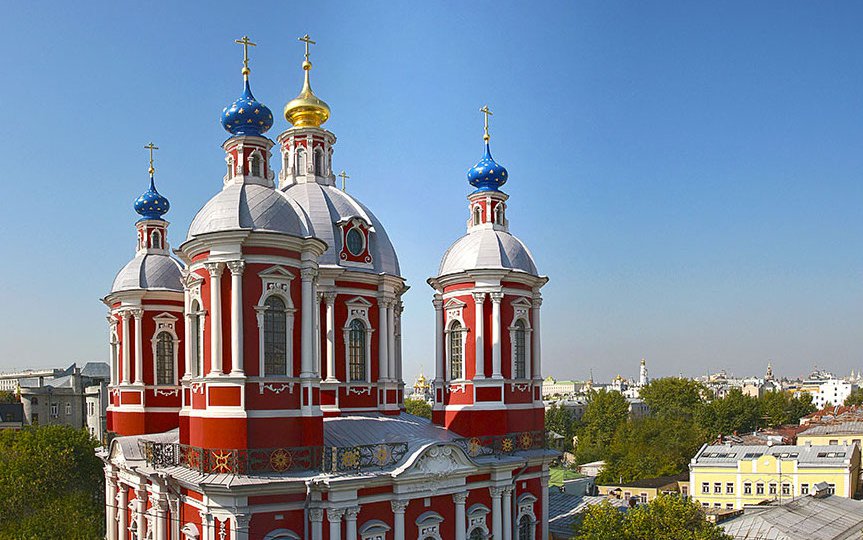 This five-domed church is the largest and most lavishly decorated of all the churches in Zamoskvorechye. Its main value lies in the well-preserved 18th-century interior decorations. The church was commissioned by the merchant Kuzma Matveyev. The creative mind behind the project was Pietro Trezzini, the son of the famous Domenico Trezzini, who created the Peter and Paul Cathedral and other iconic buildings in St. Petersburg.

Judging by the first map of Moscow, "Godunov's drawing", there was a wooden church here already at the end of the 16th century. It started transforming into its present form in 1756–1758, when a low bell tower and a refectory were built. It was later supplemented by a Baroque ensemble, whose walls were decorated with numerous stucco images of cherubs, shells, and rocailles. Inside the church, there is a 30-meter high gilded iconostasis with wooden sculptures, one of the most richly decorated in Moscow.

In the 1930s, the church was closed for worship and was about to be demolished, but a group of artists managed to defend the building. Throughout the 20th century, it was used as a book depository of the Russian State Library, which vacated the building only in 2008. This was also when the restoration of the church began. In 2013, the Moscow Restoration contest declared it the best project in the field of preserving and popularizing cultural heritage sites.