A Street of Business and Fashion 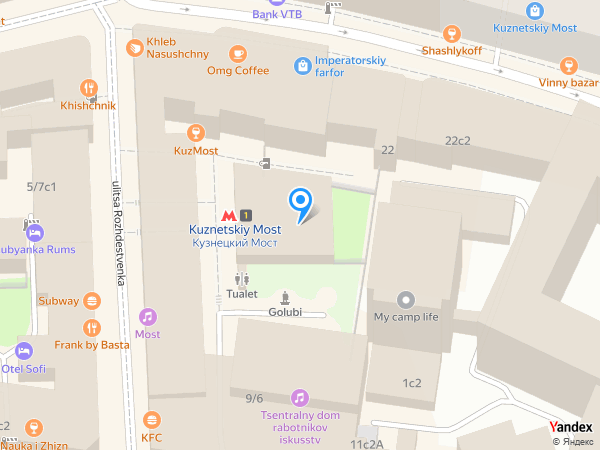 Kuznetsky Most Street is within Moscow’s Boulevard Ring and runs from Bolshaya Dmitrovka to Bolshaya Lubyanka. The name, which has survived to this day, dates to the 18th century, when a stone bridge was laid across the Neglinnaya River to replace a wooden deck. In the 16th century, at the local Cannon Yard, there was a settlement of blacksmiths, or “kuznetsi” in Russian, hence the name “Kuznetsky.” The river was enclosed in an underground pipe a long time ago, so only the name and documentary evidence recall it and the bridge. In the 17th and 18th centuries, the wealthy families of Moscow began to relocate here. Over that time, the street was built up with the estates of the nobility, residential buildings, and the houses of foreign nationals. It was not uncommon for the owners to rent out premises for shops and stores.

From then until the October Revolution, Kuznetsky Most was the main shopping street in Moscow, or, as contemporaries called it, a “sanctuary of luxury and fashion”: there were fashion stores, book stalls, photo studios, gambling houses, and restaurants. Most of the stores were owned by Frenchmen and offered the most recent fashions and gastronomic trends. In the 19th century, shops from Kuznetsky spread throughout Moscow, and the old structures were replaced by new high-rise apartment buildings, banks, trading houses, and shopping malls. Most of them survive to this day, such as for example, the four-story Popov Passage, built in 1870 to a design by architect Alexander Rezanov. The Passage accommodated the first telephone exchange in Moscow, a number of shops, and the Russian Photographic Society, and some of the spaces were rented out as residential apartments. Notably, it was the first building in the Russian capital decorated with illuminated advertising on its facade.

After the October Revolution, the shops were replaced by different kinds of institutions and agencies. Since the mid-1950s, the street has hosted the Operetta Theater, the Moscow House of Artists, the State Public Scientific and Technical Library, and the State Theater Library. The world of fashion eventually returned to Kuznetsky Most after World War II, when the All-Union House of Fashion Models became one of the main attractions on the street and the center of its social life. It can said that the present day Kuznetsky Most, with its fashion boutiques, restaurants, and shops, has preserved its historical traditions. The new life of the street is largely owed to the renovation of TsUM (Central Department Store), the main entrance of which opens onto Kuznetsky Most. Since 2012, part of Kuznetsky Most has been pedestrian only. Tourists and residents alike name it one of the most elegant streets in the capital, and it is decorated all year round with LED garlands and sculptures.