Metro as a work of art 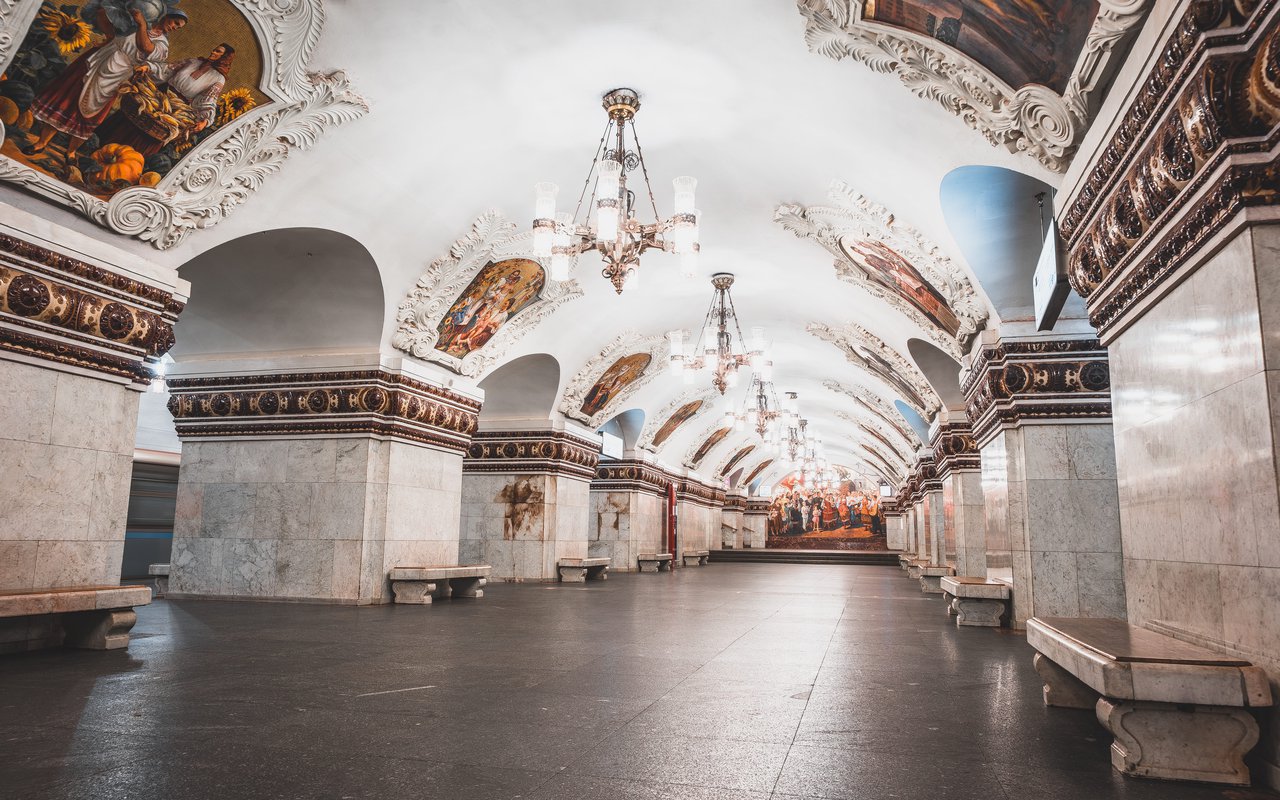 The Moscow Metro is the trademark of the city. Each of 241 stations is one-of-a-kind. The Metro has 14 lines; one of them is Koltsevaya line which is a circle route. In addition to underground lines, the Metro includes Moscow Central Circle (MCC) and Moscow Central Diameters (MCD). The former is an urban rail line that encircles historic Moscow; the latter are commuter rail lines that connect the suburbs and the city. The new Large Circle Line is currently under construction. It will connect the most remote metro stations.

Even the low-key late Soviet stations are interesting in their own way, let alone the ones built in the first years of the Moscow Metro — those are true underground palaces! The oldest line, the red one, opened in 1935. Back then, it had only 13 stations, from Sokolniki to Park Kultury.

The most famous one is Kropotkinskaya station (called Dvortets Sovetov till 1957) designed by Alexei Dushkin and Yakov Lichtenberg. Their project won two Grand Prix awards at the World's Fair in Paris (1937) and Brussels (1958). Dushkin also worked on the Mayakovskaya station. He overlapped and supported the vaulted hall with two colonnades, one on each side — a breakthrough engineering solution. The hall's ceiling has 35 mosaics depicting the work 24 Hours in the Land of the Soviets by Alexander Deineka.

After World War II, metro architecture became even more stunning. The construction of Koltsevaya line was completed by 1954. It includes Novoslobodskaya with its stained-glass windows, Kievskaya with numerous mosaics depicting the friendship between the Ukrainians and Russians, and Taganskaya with majolica on a military theme.

In 1955, the Soviet government started the "fight against excesses" which abolished the Stalinist style in architecture. Nevertheless, architects and engineers continued their creative experiments in the Moscow Metro. The Vorobyovy Gory station, built over the Moskva River, became the epitome of the Khrushchev Thaw. They used stemalite — enameled glass — to tile the platform at Tekstilshchiki. Back in 1966, it was very innovative.

The Moscow Metro continues to grow. Other stations worth visiting include Slavyansky Boulevard and Troparyovo with metal trees, Novoperedelkino with illuminated patterned panels, and Fonvizinskaya with shining arches. In the coming years, Biryulyovskaya line will open a station called Klenovy Boulevard 2, designed by the celebrated Zaha Hadid Architects.