A modern cultural center at a Stalinist building 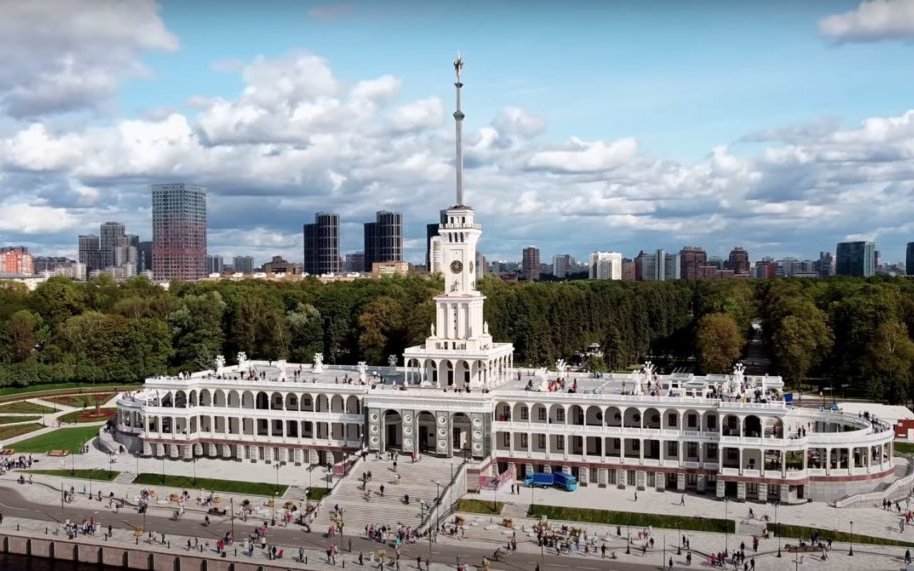 Thanks to its spire-shaped chimney topped with a five-pointed star, the building looks like a ship. The terminal was built on the northern outskirts of Moscow in 1937. The city was rapidly changing due to the ongoing reconstruction following the "Stalinist" plan signed in 1935. It also dealt with the construction of the Moscow canal (known as the Moscow-Volga canal until 1947). After the connection of the Moskva River with the Volga, the Northern River Station became the gate to accessing the capital by water, and the city received the title Port of Five Seas. North River Terminal was the home base not only for ships but also for polar aviation. You can learn about this by viewing the replica of an amphibious aircraft installed next to the building.

In 2020, the River Terminal reopened after a large-scale restoration. The building returned to its original appearance: its lost decorative elements were returned, including the fountain sculptures of dolphins and polar bears in the side galleries. The roof, with lanterns shaped like lilies-of-the-valley, is open to the public. Today, the building faces a reservoir with brass models of the Terminal and channel locks of the Moscow canal.

The Terminal houses the restaurant Volga-Volga, a tour agency where you can buy tickets for boat trips, and a regularly updated exhibition of the Moscow Transport Museum. The park outside the building is a recreational area with heated pools and sun loungers. Soon, the terminal will get a cable car connecting it to the bank of the Khimki reservoir. River transport runs regularly between Khimki and the River Terminal.