A Russian cuisine restaurant with a 19th century aesthetic 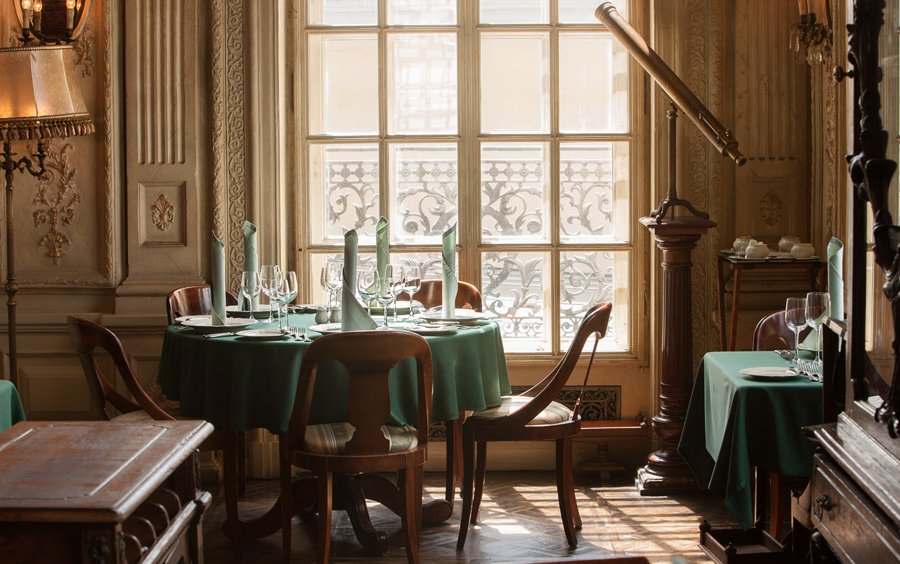 The building is notable for its astounding library, with over 3 thousand books, published in the 18th through early 20th century. Some other curious artefacts that you will find here include an English grandfather clock with chimes, a collection of carriage clocks, and a floor-standing globe.

The menu, based on Russian and French cuisine, recreates the culinary traditions from the times of the poet Pushkin. Chef Andrey Makhov, expert on Russian cuisine, has re-imagined the old recipes (like "French vinaigrette out of odds and ends, with Baltic sprat under Lent oil", or "Imperial ukha with ginger vodka and rasstegai") while retaining their original spelling, including characters that were part of the Russian Cyrillic alphabet before the revolution. The breakfast menu gets updated every month.

If the weather is warm, the café opens a rooftop terrace from where you can see the historical center of Moscow. On Thursdays, Fridays, and Saturdays, the Apothecary hall is open for 24 hours. A string quartet plays at Café Pushkin every Sunday.

The restaurant has a strict dress code, especially in the evenings.