An 18th-century palace garden with ponds and a grotto 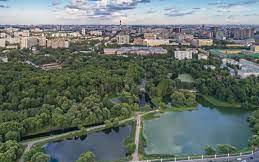 Created in the early 18th century, the park was transformed during the reign of Peter the Great — the emperor loved the Lefortovo area and was going to build a summer residence there. Its planning was done by foreign experts who built it following the Dutch standard, with a cascade of ponds and numerous sculptures, for which Lefortovo Park received the unofficial name of Versailles on the Yauza. The estate became an official residence during the reign of Anna Ioannovna. Over time, it continued to grow: the Upper and Lower Gardens appeared, and then the red brick Catherine Palace was added. However, only some parts of the garden have survived to this day: it was first damaged by a violent storm in 1904, and in Soviet times it underwent several reconstructions.

To this day, Lefortovo Park is one of the city's most picturesque gardens with shady alleys, an elegant rotunda, and many benches. There are six ponds of different sizes and shapes in the park: in summer, people sunbathe there, and in winter they go skating. Of the park's original architecture, there is still the grotto with sculptures by Rastrelli and the Catherine Palace, which can only be viewed from afar as it is now occupied by a military academy.