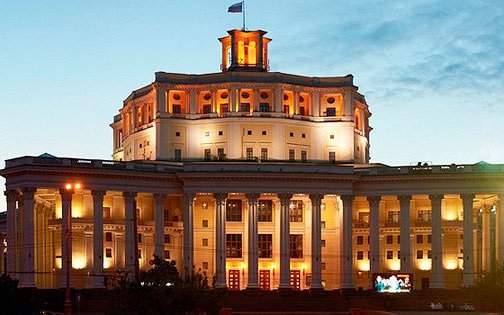 The theater's history started in 1930 when the Chinese Eastern Railway play premiered in Moscow. For the next ten years, the theater staged plays in military units and cities from Leningrad to the Russian Far East. It was the theater of the Soviet Armed Forces with numerous enlisted actors “serving” on its stage.

In 1933–1938, one of the most iconic actresses of the Soviet theater and cinema—Faina Ranevskaya—performed at the theater. In 1934, on the occasion of the theater's five-year anniversary, the plan of a star-shaped building on Kommuna Square (current Suvorovskaya Square) was approved. This project was a prominent representative of Stalinist architecture; Karo Halabyan, the chief Party architect, was one of the authors.

A significant part of the repertoire still consists of performances on military and patriotic topics. For instance, for the 70th anniversary of victory in the Great Patriotic War, the theater staged The Fate of One House about life behind enemy lines and on the home front. The theater also hosts musical concerts and KVN shows. Since 2014, the 3D musical Pola Negri has been staged here as well.

In 2020, the theatre opened a museum. The historical exposition talks about the fate of many famous actors on the front lines.