Where to have lunch in the fresh air this spring 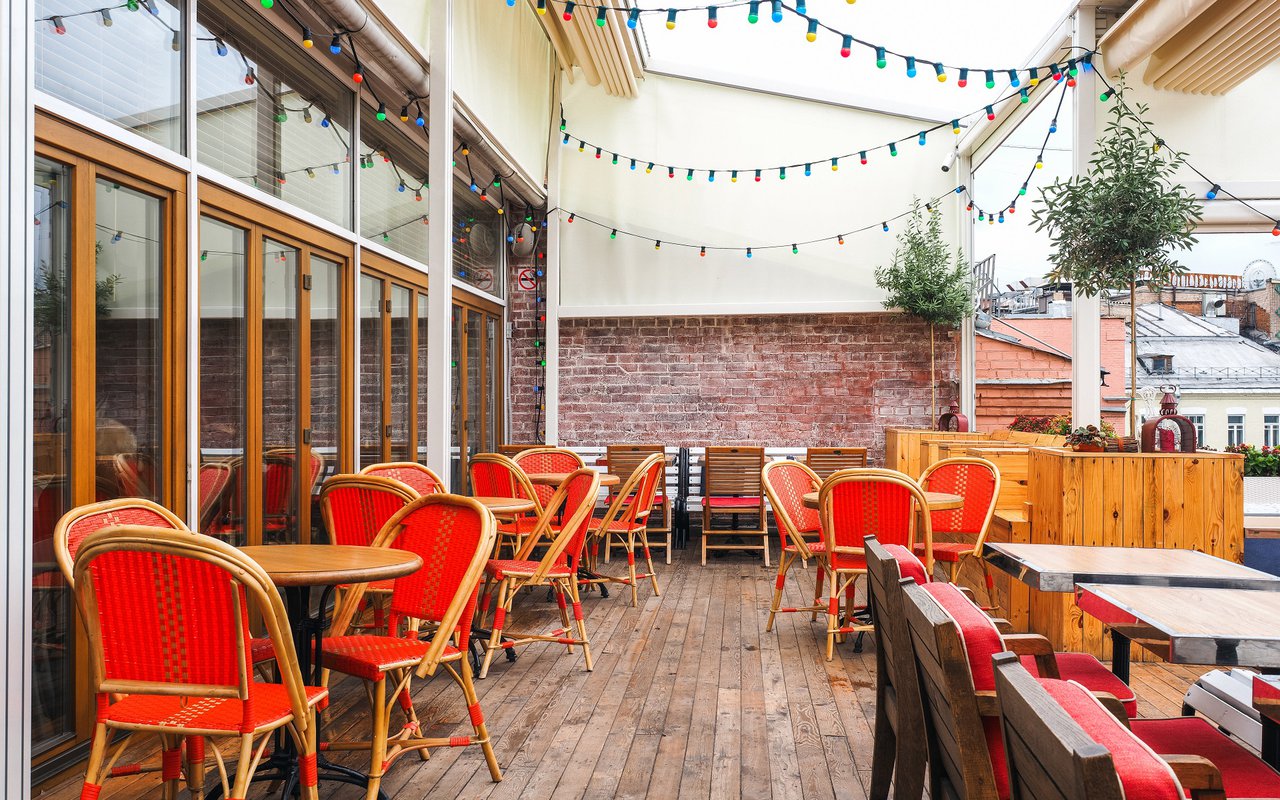 Very soon, the spring will finally set in, and restaurants will open their verandas for visitors. To help you get your bearings to decide which one to choose to open the season, we have selected the top ten restaurants with the most picturesque verandas.

Peshi offers all sorts of dishes of fish and seafood brought in from Japan twice a week. The main categories of the menu are tartare, carpaccio, sauté, cutlets, steaks, pasta, and risotto. The restaurant’s bar menu is as extensive as its main menu: the wine list features over 250 wines from all over the world (mostly European), about twenty cocktails (both classical and original), and spirits. As the restaurant is located in the building of the Hotel Moskva, its veranda offers a panoramic view of the Kremlin and the State Historical Museum.

A restaurant and bar with an open terrace

The veranda seems to be the main feature of the restaurant (the location owes its full name, “Happiness on the Roof,” to it): it is open for visitors almost every day when the weather is good enough, and guests can take a seat at a table or in a big wooden swing and enjoy the view of the roofs of Moscow. The restaurant’s cuisine is mostly European. People often go for a late breakfast, which is served until 4 pm.

A restaurant that blends Pan-Asian and Caucasus cuisine

KrabyKutaby can boast the largest veranda in the trendy Depo gastro cluster. The space matches the restaurant: it is covered in flowers, with bright sofas and a fold-out roof in case there is a sudden downpour. The menu includes two main sections. The first features more than 10 types of crab, langoustine, shrimp, and other seafood. The second features modern interpretations of chebureki, khachapuri, khinkali, and other Caucasian dishes.

The restaurant, with an exquisite interior and an extensive menu, occupies a space on the fifth floor of TSUM (Central Department Store) in the center of Moscow. In summer, the veranda opens, offering a view of the Bolshoi Theatre and Petrovka and Neglinnaya Streets, and becomes one of the main landmarks of the capital for the season. The menu was developed by brand chef Dmitry Zotov. He created a menu for Buro that was built on contrasts: seasonal products and minimalistic items pair with gorgeous desserts and variations on seafood.

A modern Russian cuisine by the brothers Berezutsky

The restaurant is included in the prestigious international ranking of the 50 Best Restaurants of the World. There is good reason for the “garden” in the name: two thirds of the food products arrive at the restaurant from the farm. In addition to vegetables, fruit, berries, and herbs, fish, poultry, cows, and goats are also farmed. The opulently decorated veranda is located on the second floor. It offers a view of the center of the capital and the Moscow City complex.

This is a concept store with a restaurant on the third floor. The menu items are often developed in collaboration with world-leading chefs. In summer, a veranda opens with a view of Stoleshnikov Lane, Bolshaya Dmitrovka Street, and Tverskaya Square, and the glass floor allows guests to see what is happening in the store.

The restaurant’s principles have not changed since its launch. The kitchen gets the very best and fresh food products from trusted suppliers. The bar menu features a wide selection of wines and grappas, mostly Italian. The restaurant has a heated veranda, which is open almost all year round, a great advantage in view of Moscow’s weather, which is often cool even in summer.

Italian cuisine with a focus on mushrooms

This is a modern Mediterranean restaurant from the White Rabbit Family gastronomic association. The creators of Mushrooms have put special emphasis on Italian cuisine. The establishment’s distinctive feature is its focus on mushrooms selected monthly by mycologist Mikhail Vishnevsky, and the restaurant’s concept has been created around them. In summer, the veranda on the roof opens, and it is widely agreed to be the most beautiful in Zamoskvorechiye.

White Rabbit is one of the most popular and recognized restaurants, not only in Russia, but in the world. In 2015, the restaurant was included in the prestigious international ranking of the 50 Best Restaurants of the World for the first time and has been listed every year since. The panoramic restaurant is located on the 16th floor of the Smolensky Passage building, and its open veranda is an ideal spot for a gastronomic journey with a view of the Ministry of Foreign Affairs building and its surroundings.

A restaurant with a massive Russian stove in the kitchen

The restaurant’s culinary philosophy is based on the approach that Russian cuisine can be up-to-date, even with the use of old cooking techniques: most dishes are stewed in an oven for several hours. The summer veranda is small, but very cozy. There is often live music in the evenings.

Cover photo: Happiness on the Roof

Around the North River Terminal

An tour around a new urban space