From the largest skating rink to the estate of Father Frost 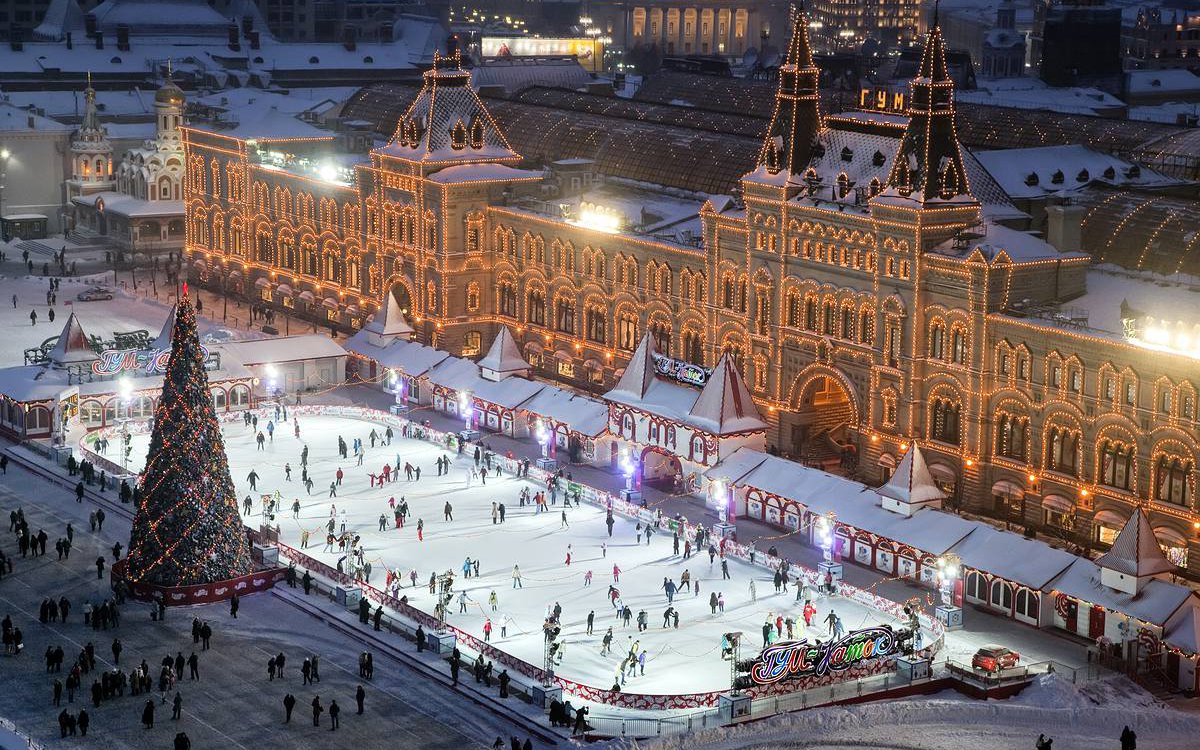 We will tell you about the main festive activities in Moscow: the program includes New Year’s performances, Christmas fairs, and New Year’s dishes.

Red Square has consistently been the most popular destination for New Year’s celebrations. A skating rink opens right on the square: you can get to it through the main entrance of GUM, and you will have the chance to skate with a view of the Kremlin and St. Basil’s Cathedral. There is also a traditional fair where you can buy New Year’s baubles, knitted mittens, Orenburg and Pavlov Posad shawls and other handicrafts, as well as drink hot tea or mulled wine.

The theatrical repertoire before New Year traditionally consists of thematic performances. Among these are the main Christmas ballet The Nutcracker, the opera The Story of Kai and Gerda, based on Hans Christian Andersen’s The Snow Queen, and other classic productions. We recommend buying tickets in advance.

The country’s main exhibition space is a favorite holiday destination for Muscovites during the New Year’s holidays: themed tours of the pavilions are held here, free concerts for children are organized,and the park food court becomes a fair. The park also has the city’s largest skating rink (over 20,000 square meters), a tubing slide, and a curling rink.

The amusement park organizes a special program for the winter holidays: strolling between rides, visitors meet the characters of Christmas tales, and live New Year’s music is played at weekends. In the landscape park next to Dream Island, there is a Christmas market where you can buy holiday gifts and taste Russian cuisine.

On pre-holiday evenings, the estate museum hosts New Year’s balls inspired by 19th-century salons. Guests gather in the Grand Palace and spend several hours dancing – from polonaise to mazurka. There is a mandatory dress code: tailcoats for men and ball gowns for women.

By the New Year, the capital’s main park looks like a mysterious Christmas city: its main alleys are decorated with colorful garlands, a twenty-meter high spruce tree is placed on the square near the central entrance, and New Year’s music plays from the speakers all day long. People come here to go ice skating in Gorky Park (the skating rink is flooded right on the park paths), look at the ice sculptures (which are different every year), and ride tubes down the slide in the adjacent Muzeon park.

One of Alexander Rappoport’s most famous restaurants is located in the historic center of the city, in the building of the National Hotel with a view of the Kremlin. The establishment serves the chef’s interpretations of classic Russian dishes: meat and other dumplings, porridges and pancakes, and soups and pastries. One of the restaurant’s main specialties is a traditional New Year’s dish, Russian salad, to which smoked chicken and cucumbers of signature salting are added.

The “Versailles of Moscow”

One of the most picturesque parks of the capital, which is especially beautiful in winter: European architecture standing out against a background of snow-covered trees and straight alleys. Kuskovo is more than just a tourist attraction, but a green spot popular with residents of the southeast of Moscow: for the New Year, spruce trees are decorated here, and at weekends there are themed performances for both adults and children.

Metro as a work of art

On New Year’s eve, the Moscow metro operates without interruption – this is the only time of year when the system can be used at night and very early in the morning. The station lobbies are decorated for the holiday, and some metro lines run special New Year’s trains with images of spruce branches, garlands, and artificial snow.

A restaurant that cares for the environment

This minimalist Nordic-style signature restaurant has been awarded the Green Michelin Star for institutions that use sustainable practices. The cooks use exclusively seasonal products that the restaurant receives directly from regional farms, so the menu changes with the seasons. The winter menu includes dishes made on an open fire, mimicking campfire food.