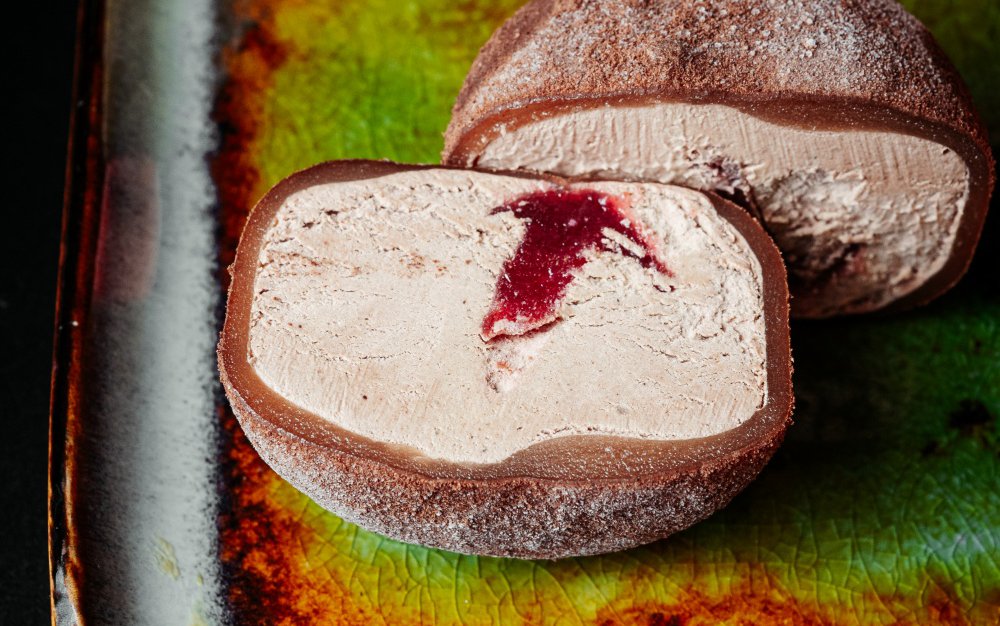 We tell you where to find ice cream in Moscow: from classic eskimo, familiar since childhood, to homemade Italian gelato, to floral ice cream invented during a walk through Kolomna, to Japanese ice cream in rice flour.

With the taste of childhood – the classic chocolate-covered ice cream

For more than 80 years, the exhibition has had people eating its famous chocolate-covered ice cream on a stick. Historians of VDNKh have estimated that almost half of the country has tasted eskimo ice cream here over the decades. And if in the Soviet times guests lined up at the ice cream pavilion, today, you can taste this cold delicacy at several places: at special pavilions (Ice Cream – building 575 and Ice Cream Laboratory – building 417) and at specialized kiosks. In addition to the classic ice cream, you can taste VDNKh’s specialty ice creams, including three types of eskimo: Jubilee VDNKh, Almond and Pistachio VDNKh, and Vanilla VDNKh. In addition, the Ice Cream Laboratory presents a Handmade Eskimo corner: in front of the customers’ eyes they create a refined and unique Eskimo, complementing everyone’s favorite variety of bitter, milk or white chocolate and confectionary decorations.

An interactive facility with an ice-cream factory and museum

Simple and straightforward desserts at the highest point of the capital

The highest point in Moscow, where ice cream is not only eaten but also made, is on the 89th floor of the Federation Tower. There is an ice cream museum and a mini-copy of the Chistaya Liniya factory with a small museum. Guests can watch the production process, try freshly made cold desserts, and learn how ice cream has become one of the most popular treats. The main thing here is that the desserts are simple in a good way: the flavors are familiar and clear, but there are also a few types for those who are prepared to experiment, for example, black rich ice cream.

The best company is not a cup of coffee, but a pot of tea

The two-story tea house on Pokrovka believes that experimental ice cream is the best companion to the hundreds of varieties of pu’er and oolong. Here they make the main cold dessert with unusual flavors: with champagne and white tea, mulberry, pine cones, Crimean rose, lavender, juniper or lotus, white kvass, green wheat, blue cheese, cloudberries, birch juice, cactus, marshmallow, and banana. It is important that for vegans they serve ice cream without animal ingredients.

Ice cream made from lilacs that grew near Akhmatova’s house

Here, they not only experiment with main dishes, but also with desserts. The main ice cream of the summer is lilac with yogurt and mulberry. You can only try it during the summer months. The history of how this delicacy appeared is entertaining: several years ago, chef Vladimir Mukhin was walking around Kolomna, where apple marshmallow was once invented, and he dreamed of floral ice cream. A huge lilac bush grew near the house where Anna Akhmatova used to stay. The chef cut some twigs and took them with him. That same evening, he made a new dessert for Argo Murelius, executive editor of the White Guide Nordic. The lilac ice cream was sprinkled with mulberry berries, and the sweetness was balanced with cheese mousse. The experiment turned out to be a success and was included in the summer menu.

A confectionery with eclectic interiors

Go to the old building on Pokrovka Street for popsicle desserts on a stick: frozen cheesecakes, yogurts, and fruit juices with various additives. And also for homemade ice cream: cherry with cinnamon, blueberry and raspberry with coconut, and with boiled condensed milk and gingerbread.

Modern Sicilian cuisine near the Kremlin

They say that if you want to taste ice cream that is made in Milan or Rome, you have to go here. And there are more than fifteen kinds of cold dessert on the menu. The basic classics are on display: chocolate, strawberry, pistachio, yogurt, coffee, raspberry, mango, cherry, salted caramel, or Italian gianduja chocolate-nut paste. You can also order original desserts. For example, Vulcano, a coffee and vanilla ice cream with crushed cookies, chocolate and whipped cream, is served with espresso. Or Gattopardo, basil ice cream with strawberries and wild strawberries, topped with olive-vanilla oil, caramelized olives and garnished with waffles. But if you want something really special, you had better ask the chefs: they come up with new flavor combinations every season.

Gelateria with 70 kinds of ice cream in Kitay-Gorod

At Cafe Gelateria, the team believes that the taste of childhood can be experienced at any age. More than seventy varieties of gelato and sorbets are made here to the family recipes of master Sergio Dondoli, one of the best ice cream makers on the planet and winner of the Ice Cream World Cup. There are classic international flavors, with milk or bitter chocolate, halva, vanilla or cherry. And there are special ones, adapted for the capital’s visitors. For example, with porcini mushrooms, pumpkin, gorgonzola and walnuts, white wine and raisins.

A food mall in a former tram depot

Ice cream is made in seven corners at Depo Food Mall. They don’t limit themselves to classic ice cream here: you can try artisanal gelato, Japanese and Thai ice creams, and macaron ice cream. Let’s start with the last one. They are ice cream sandwiched between two macaron halves. They are made in the Mon Bon corner, and you have to try the ones with salted caramel, Sicilian pistachio, or raspberry and basil flavor. For Japanese ice cream in rice dough, go to Fluffy Fluffy, Sweet Lavka, and Ryba International, where they make it in orange, green tea, watermelon, banana, or cherry and truffle flavors. Farinari is produces homemade Italian gelato with eighteen different flavors. And in the Vanilla Spatula corner, ice cream is only made from natural products and with Thai technology: using two spatulas and a cold surface, the milk mixture with fruit is transformed into a pastry masterpiece, for example flavored with lavender and blueberries.

In the Asian cafe chain, ice cream balls are wrapped in mochi, a viscous mass made from rice broth with the addition of sugar and fruit juices. The original flavor of this dessert is because of the rice fondant. You can order a set of three mini mochis, and one of the balls is green tea flavor. After a serving of hot and spicy noodles, this seems like the best refreshing option.