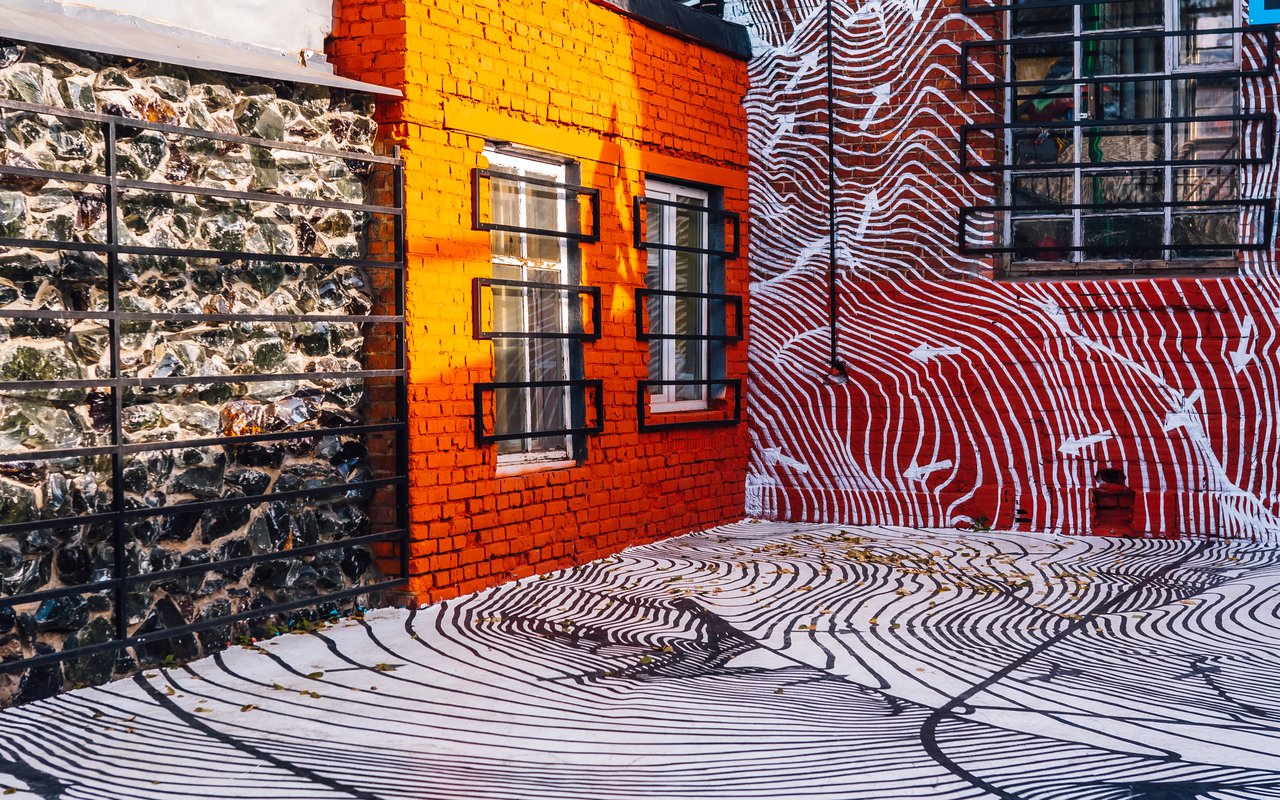 In recent years, Moscow has been turning fast into a giant gallery of street art as former industrial facilities are converted to design districts, facades of the shopping malls get creative paint jobs from world-famous A-listed street artists, and large graffiti fests take place on an annual basis. We have put together Moscow's major street art hotspots.

A city block with festivals

The former industrial facilities on Novodmitrovskaya Street have long become a modern design quarter. The walls of the factory premises were given to street artists for painting. Little by little, this place turned into a full-fledged outdoor street art exhibition. Here you can see graffiti, photorealistic murals, and various art objects (the trolleybus sticking out of a brick wall is simply iconic). Flakon hosts Moscow Urban Fest, the city's main street art festival, every year, so the graffiti collection is constantly expanding.

The Artplay design center could not but become subsumed by street art culture: several years ago, European street artists were invited to paint the facades of the former factory. Here you can see stencils by the French artist C215, not unlike Banksy's style, a huge mural by the Ukrainian art duo Interesni Kazki, conceptual graffiti by Misha Most, and many other fascinating pieces. Also, the center often hosts discussions on pressing problems in the street-art world and workshops for teenagers.

A shopping center with a painted facade on the Garden Ring

In 2018, the facade of a shopping center by a railway station became a point of attraction for Moscow's visual culture, as eleven Russian and foreign artists painted its walls. Among them were Shepard Fairey, the founder of the Obey brand, and the American designer Futura. Start your street art tour to Atrium in the gallery that connects the Kursk railway station to the shopping center. The panoramic mirrors were done by Pokras Lampas, the pioneer of calligraphy in Russia.

The Center for Contemporary Art on Kurskaya was one of the first in Russia to develop a keen interest in street culture. Here, the street art is on a par with gallery art. Foreign artists gladly come to Winzavod; ten-year-old works are still to be found on the factory walls. A few years ago, the center launched Project Wall, transforming the cluster's concrete fence into a temporary exhibition. It featured major Russian street artists like Kirill Kto, Nootk, and Abel. Later, the wall was demolished.

One of the first Moscow street art festivals took place in the historic quarter in Kitai-Gorod. Its stunning works have survived to this day. The cluster house art studios and workshops: facades and doors are painted in various techniques. Look a little closer, and you will find numerous art objects. The mural by Moscow team 310, which copies the style of the pop art classic Roy Lichtenstein, is worthy of special attention.