How to get a Michelin star 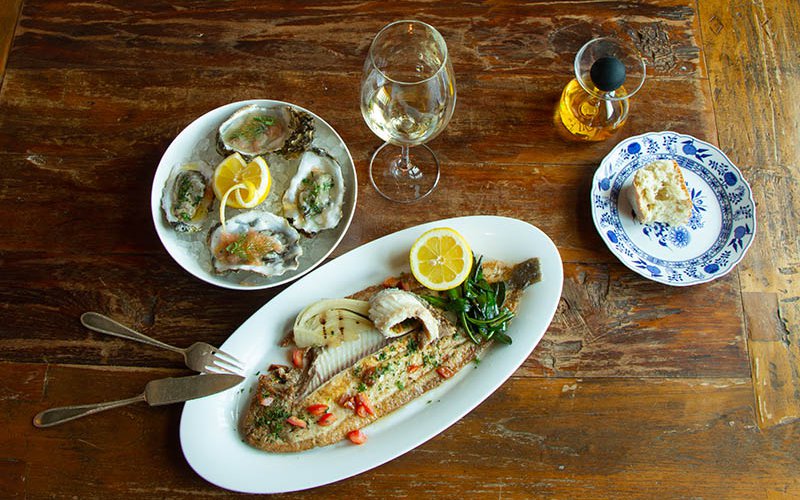 The Michelin guide, the world's most prestigious gastronomical ranking, now includes 69 restaurants in Moscow. In addition to establishments that have been awarded stars, several more places were given the Bib Gourmand distinction, which is awarded to restaurants that offer good cuisine at affordable prices. Let's do a rundown of all the Bib Gourmand places in Moscow.

A fish restaurant on the embankment

Number one is Alexander Rappoport's flagship fish restaurant, right across the street from the White House, on the ground floor of the Hotel Ukraina. The interior decor is accented with a maritime theme while the menu is replete with seafood dishes from all around Russia. The choice selections include sterlet stroganina, cod liver, Sosva spicy herring and musk sugudai, Kamchatka crabs, chillim shrimps and sweet crayfish.

A restaurant that cares for the environment

The minimalist Nordic style restaurant that popularised zero waste in Russia: natural materials in the interior decor, delicacies with no packaging and recycling what they can. The menu is seasonal, with the main ingredients comprising game, roots, seasonal vegetables and wild berries.

A traditional Greek establishment with a spacious summer veranda reminiscent of Attic taverns. The menu features barbecued meze snacks, oven cakes with a selection of fillings, lukumades doughnuts in honey syrup and spirits like rakia, ouzo and tsipouro.

An a-la-carte restaurant where the dishes are cooked in 19th-century vintage firewood stoves imported from the US: the idea is to offer rough food to the intelligentsia — the menu features standard dishes such as burgers, pasta, steaks made using unorthodox ingredients. Here, they add beef dumplings in the pumpkin soup and rock sugar in capunti pasta, while the caesar salad is served with a seafood kebab.

A restaurant with a wide range of Georgian wine

A modern Georgian restaurant with a sophisticated interior made of empty wine bottles and metal extrusions that offers a wide selection of ethnic snacks and cheeses, along with a large menu of main courses (including fish dishes) as well as an impressive selection of wines.

An anti-bistro establishment that offers French cuisine with some ethnic elements mixed in: the menu has both traditional French dishes as well as variations on Spanish, Italian and even Thai offerings. The menu is complemented by a large selection of exclusively red French wines.

A European restaurant with a real fireplace and a gastronomical library, Delicatessen does not limit itself to one specific type of cuisine, instead, their chef simply cooks whatever he finds interesting regardless of the current trends. The menu is updated in step with seasons. The main feature of the establishment is a unique bar menu where you have to get the bartender to help you select a cocktail.

A gastrobar on the semi-basement level of a building

A chamber restaurant with a Scandinavian style interior whose menu comprises a mix of Northern dishes (smoked yoghurt, baked root vegetables and traditional rye bread) and experimental Japanese offerings. The alcoholic beverages on offer comprise a variety of wines as well as classic and house cocktails.

A restaurant of custom Italian cuisine at Patriarch's Ponds

An a-la-carte restaurant that emphasises the change of seasons: the ingredients are imported from a variety of countries depending on the time of year. The menu features modern European cuisine (salads, pasta, grilled foods) complemented by Italian dishes such as predjiato truffles, vongole, artichokes and bottarga.

A gastronomic experiment with a wide range of wines

This restaurant has no waiters and a quaint little hall where food is offered as a complement to the wine. The wine menu has some fifty items on it, including French red wines, Mediterranean white and sparkling wines as well as Champaign and bio-dynamic wines. Emphasis is on snacks and chasers with some of the most popular offerings including roast beef with onion sauce, a hummus set or tender salmon riet.

An interpretation of traditional Japanese cuisine

A Japanese restaurant with a view of the old Trubetsky estate and an Asian-style interior. The establishment offers more than a dozen types of sushi (including sea ​​urchin and eel), ceviche, tartare and carpaccio, as well as national Japanese dishes of rice and seafood.

A fish restaurant on the Prechistenskaya Embankment with a beach bar atmosphere: lightly coloured walls, maritime decorations and lounge music; the menu features seafood only, the most prominent offerings include Far Eastern scallops, northern shrimps and more than twenty types of ceviche.

Restaurant with a veranda in the Tbilisi style

A Georgian restaurant in the style of a café in Tbilisi sporting a shady veranda. The menu has both traditional Georgian dishes as well as the chef's personal interpretations of Georgian cuisine and, in the morning, the establishment serves traditional Georgian breakfasts with fried suluguni, achma and homemade jam.

A fish store and a seafood restaurant on the Patriarch Ponds where you can taste some rare fish (yellowfin tuna, scallops and dorado) or order modern European dishes (pasta with crab, langoustine ceviche) and polish off your dinner with a bottle of white wine, of which the restaurant has more than 50 kinds on offer.

Photo of the Michelin cover