Pushkin was here: where famous writers lived in Moscow 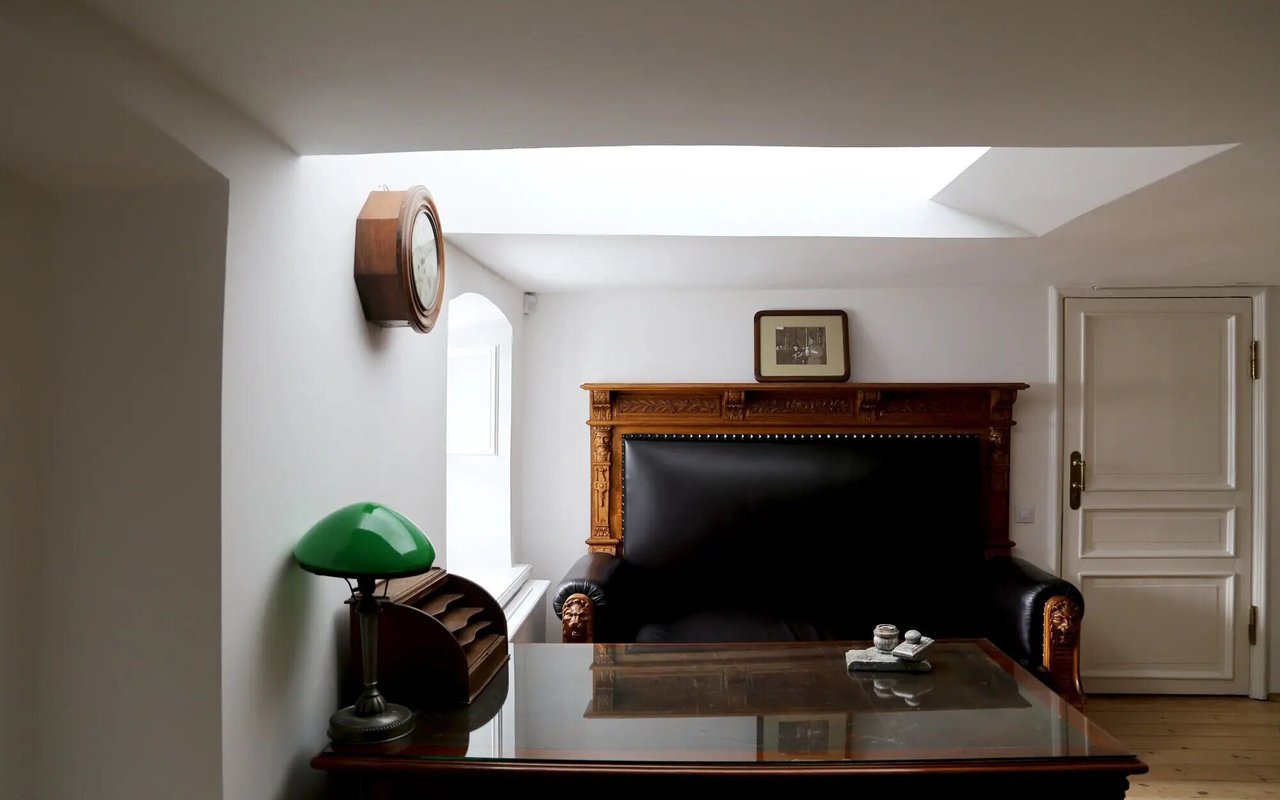 It is not necessary to go to Yalta to learn about Chekhov’s habits, or to Bulgakov’s house in Kiev to see his manuscripts. We will tell you about the Moscow residences of famous writers which have been turned into literature and memorial museums.

The museum dedicated to the great poet

The apartment rented in Moscow by Alexander Pushkin was rather modest: five rooms on the second floor in a house on Arbat Street. This was the place of his bachelor party attended among other guests by Prince Pavel Vyazemsky, poets Nikolai Yazykov and Denis Davydov, philosopher Ivan Kireyevsky. This is where he brought his wife Natalia Goncharova after the wedding, and where they spent the first three months of a happy married life.

Some of the museum halls are occupied by literature artifacts describing the culture, art and everyday life of Moscow in the time of Pushkin. Visitors will see the works of Pushkin and his closest friends published in Moscow, tickets issued by the Moscow Censorship Committee, lots of drafts, illustrations, sketches and letters written by the poet.

Another important part of the museum are private rooms of Pushkin. They are almost empty now. A few decorative elements in the Empire style – elegant heavy curtains reconstructed from samples of the 1830s, chandeliers of bronze and crystal, gilded sconces, candelabra, girandoles and vases – have been relocated to spacious halls. However, much more important are those relics which are the Pushkin’s age-mates: walls and window openings, stoves and memorial household items.

The poet's personal items in the 19th-century manor

The only surviving house where the poet used to live is a wooden city estate on Malaya Molchanovka Street. Lermontov lived here with his grandmother Elizaveta Arsenyeva between August 1829 and July 1832. Museum halls recreate the interiors of a Moscow mansion of the 1820–1830s. The exhibits describe Mikhail Lermontov’s childhood, the years of his studies in Moscow, range of interests and hobbies. Among others, there are his only known self-portrait, books with his autographs, family portraits and drawings, oil paintings created by Lermontov in the Caucasus.

Fyodor Dostoevsky’s parents lived in a small apartment in the northern wing of former Mariinsky Hospital for the Poor. At that time the street was called Novaya Bozhedomka. Dostoevsky’s father was a doctor, and accommodation was provided for his services. The writer lived here between 1823 and 1837. Since then, the rooms have never been rebuilt: the walls, stoves and ceilings remain the same as during the life of Fyodor Dostoevsky.

The historical interiors of this apartment were recreated in 1980, based on the memoirs of Dostoevsky’s younger brother Andrei who left a detailed description of the apartment from his childhood, including drawings and sketches. Among the exhibits there are an oval bedside table, a bookcase, portraits of parents and ancestors, bronze candelabra, a sofa purchased by the writer in 1866 during his stay in Moscow, a writing desk from his last apartment, an inkstand, glasses, a Gospel Book presented by the Decembrists’ wives in 1850, calling cards, and a box with cigarette wrappers.

This museum has a remarkable tradition – every visitor leaves a record in a special memorable book, which is carefully kept for years. It contains the names of all and every people who have ever been here.

The place where Ivanov and The Steppe were written

Anton Chekhov called a two-story stone wing built in 1874, which now hosts his museum, a “chest of drawers”. It was rented by the writer’s family from the famous doctor Yakov Korneev. Chekhov lived here from August 1886 until his departure to Sakhalin in April 1890. Here he wrote such plays as Ivanov, The Wood Demon, The Bear, A Marriage Proposal, The Wedding, A Tragedian in Spite of Himself, Tatiana Repina, novellas The Steppe, Lights, and A Dreary Story, and many short stories. The house on Sadovo-Kudrinskaya Street was visited by famous artists, writers and actors of that time: Korolenko, Gilyarovsky, Levitan, Shekhtel, Tchaikovsky, Nemirovich-Danchenko.

Its today’s guests are those who want to learn about Chekov’s life. The interiors have been restored from drawings and memories of his brother and sister. In the halls devoted to literature the visitors can trace the evolution of a short-form writer into the author of major works. Some personal belongings have been preserved as well: a writing desk, a pair of candlesticks in the form of dragons, fishing gear, and an inkwell with a figure of a horse. Among others, the museum displays lifetime publications of Chekhov, a collection of rare photographs, articles once owned by the Chekhov family, a collection of theater posters and phototypes. In terms of size and importance, it holds second place after the Chekhov House Museum in Yalta.

"A bad apartment" from "The Master and Margarita"

Mikhail Bulgakov was born in Kiev where his biggest memorial apartment is located. However, there is also a small museum of this famous writer in Moscow – the home city of many of his stories and heroes.

Several rooms in the iconic “bad apartment” in Bolshaya Sadovaya Street have been turned into a memorial space. From floors to ceilings, the walls in the hallways are covered with quotes from The Master and Margarita and images of Bulgakov’s characters. The apartment depicts the typical details of Moscow interiors of the 1930s. These are parquet with worn varnish, shabby furniture, wallpaper with flower patterns, bottles with kerosene, primus heaters, pots and other old-fashioned kitchen items.

Several displays – The First Study in Moscow, Blue Parlor, Editorial Office and Kitchen illustrate Bulgakov’s live on Bolshaya Sadovaya Street. A bookshelf supported by sphinxes hangs over a writing desk with a lamp. Blue Parlor embodies the writer’s dream of a room with blue walls. Its main exhibit is a big mahogany writing cabinet, a birthplace of The Master and Margarita’s manuscript. Also there are some personal belongings of the writer, his death mask, a paper folder, a leather cloak and a handbag of Lyubov Belozerskaya, Bulgakov’s second wife. The museum holds a collection of medical instruments from the hospital where the writer worked, and a vase once owned by a Svetlaev family mentioned in The White Guard. Besides these, there are historic photographs, documents, publications, artifacts and everyday items related to Bulgakov and his biography.

Gorky lived in Ryabushinsky mansion on Malaya Nikitskaya Street designed by Fyodor Shekhtel in the style of European Art Nouveau for several years before his death in 1936. According to his contemporaries, Gorky did not like this house because it was too fashionable and aristocratic. Indeed, it is a real jewel of architecture with its multi-level windows and fanciful facade decor, the famous Shekhtel’s wavy stone staircase, stained glass windows, and stucco in the nautical style. The laconic and minimalist interior decorations look completely opposite to this splendor. At Maxim Gorky’s request, one of marble fireplaces was disassembled and replaced by numerous bookcases – this unique library and most of the articles have survived to this day.

This is where he received Romain Rolland and worked on the epic novel The Life of Klim Samgin until his last days. This apartment was visited by Joseph Stalin and his confidants, foreign delegations and famous writers. Today the guests of this museum can visit a secretary’s office, a library, a dining room, and the Gorky’s study. There are many of his personal belongings in the latter, including collections of Italian landscape paintings and netsuke figurines. There are an inkpot and sharpened pencils on his writing desk. The whole scene looks like their owner went out for a short while and will soon return to his work. Just as during his lifetime, Gorky’s cane, boots and coat wait for him in the hallway.

Twenty-two-year-old Marina Tsvetaeva with her husband Sergei Efron and two-year-old daughter Ariadna settled in this house on Borisoglebsky Lane in September 1914 to spend the following eight years. During this time, the poetess wrote hundreds of lyrical verses, six romantic plays, four poems, as well as translations, prose essays, letters and diaries. Museum workers have restored the fascinating one-and-a-half-story layout of the apartment which was so much inspiring for Tsvetaeva. The visitors can not only learn biographical facts, but also breathe the air once breathed by the poetess. The space is as white as a piece of paper. Thanks to this, the exhibited personal items appear to have zero gravity, while the poetic lines and voices of the poetess, her family, friends and contemporaries sound more meaningful.